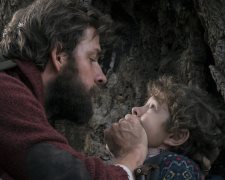 It can take a little while for a movie to reel audiences in but A Quiet Place will hook them from the very opening scene.  The world (or at least the United States) has been attacked by giant grasshopper-like creatures which devour any type of living being.  It took a little while for the human population to catch on but these monsters don’t rely on sight.  Rather, they are attracted to sound.  They won’t attack you… provided you don’t make a single noise.  Cool premise, right?  Could you go the rest of your life without making a single sound if your life depended on it?

That’s the position that the Abbott family find themselves in.  They’ve taken refuge in a simple home in a rural part of their country.  Every part of their daily routine has been altered so that they make as little noise as possible.  They remove their shoes when walking outside and are careful about every step.  They have painted marks on wooden floorboards so they know where to place their foot without making a creaking noise.  They communicate using sign language – a practice they’re familiar with given one of their children is deaf.

I love eating popcorn when going to the movies but I’m the first to admit that isn’t the best idea when going to see A Quiet Place.  Given the premise, much of the film is deathly silent – no dialogue, no sound effects and no background music.  It’s a great movie to see in a packed cinema because audiences will be conscious of their own noises.  Whether it be a simple cough or the opening of a packet of lollies, every sound will feel louder and more prominent than usual.

The writing team have no intention of letting us off lightly.  We can see them laying the groundwork for more complicated scenarios which are to follow.  There’s a scene where the mother unknowingly exposes a long metal nail which is protruding from a step.  It’s only a matter of time before someone steps on it.  Will they scream?  We also learn that the mother is pregnant.  How can they possibly bring a crying baby in the world and expect it to survive?

With just a handful of actors needed for the whole movie, A Quiet Place has been brought to the screen by actor-turned-director John Krasinski (The Office).  He’s busy in front of the camera too.  Krasinski takes on the role of the father with his real life wife, Emily Blunt (Into the Woods), playing the mother.  The child actors also pull their weight.  14-year-old Millicent Simmonds (Wonderstruck) is a deaf actress who, in addition to her great performance, helped teach sign language to her fellow actors.  13-year-old Noah Jupe will also be familiar to audiences who saw Wonder late last year.

The film will have its detractors.  Some will be frustrated by the lack of background knowledge about this world and how these creatures came to inhabit it.  Others will be wondering about the choices made by this family such as the decision to have another child.  Those questions/criticisms have merit but for me, the creative premise and creepy vibe outweigh any perceived negatives.

We’ve had some great horror films in recent years such as The Babadook, Don’t Breathe and Get Out.  A Quiet Place deserves to be included in their company.