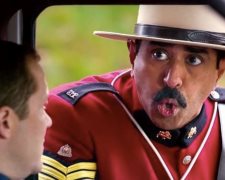 This sequel has been a long time coming.  I asked a few friends if they were keen on coming along to a preview screening and most had never heard of the original.  That’s largely because it was released back in 2002 and whilst it developed a semi-cult-like following at the time, it has generally faded from memory over the past 15 years.

If you’re in need of some background information, Super Troopers was the creation of a comedy team who met at a prestigious liberal arts school in New York.  The pulled together a few million dollars to create a low-budget movie about dodgy state troopers (similar to Police Academy) and after making fans at the Sundance Film Festival, the movie was released more widely across the globe.

The same guys have returned for this sequel where they serve as both the writers and the lead actors.  The broad premise wins points for creativity.  The U.S. and Canadian governments have realised that a small part of the border between their two countries was incorrectly drawn many years ago.  A correction is now being made.  The state of Vermont will be enlarged and will now include a small parcel of land previously classified as Canada.  Our protagonists have been enlisted to help with the transition and to introduce American laws into the area.

Suffice to say that the Canadians are not happy.  When the troopers are introduced to the affected townsfolk at an impromptu meeting, they are heckled before they even get a chance to speak.  The local Canadian Mounties, who have been policing the area for decades, are also upset given they’ve lost their jurisdiction and will be transferred to other towns.

What follows is large scale high jinks.  The super troopers play practical jokes on themselves, on the Mounties and on the wider population.  If you’re looking to appreciate the style of humour, it’s lowbrow stuff.  There’s a scene where one of the troopers gets tied naked to a bench as part of an initiation ceremony.  There’s another where they end up in a brothel which is run by the local mayor (played by Rob Lowe).  As all of this goes on, the troopers are somehow trying to solve an actual case involving illegal guns and drugs.

In the original Super Troopers, about 50% of jokes hit the mark.  I’d argue that percentage is a little lower this time around.  Much of it feels improvised with the actors trying to craft witty lines on the spot but struggling to find enough material to last 90 minutes.  I chuckled a few times but not nearly enough to justify this film’s existence.  It’s hard to believe the Broken Lizard team couldn’t come up with a better script given the project has been in the works for so long.