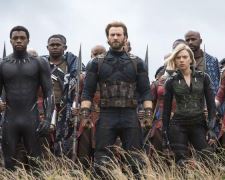 There have been many successful movie franchises throughout history but what Marvel Studios has created over the past decade trumps everything else.  The 18 films released have grossed a combined $14.8 billion USD at the worldwide box-office.  There’s no sign of moviegoer fatigue considering their latest release, Black Panther, has just become the third highest grossing film of all time in the United States (behind Star Wars: The Force Awakens and Avatar).  It feels like Marvel could make a movie which is just a blank screen for two hours and people would still pay to see it.

Despite all that, there are still risks involved with Avengers: Infinity War.  How do you take this many characters, bring them together, and still create a compelling narrative within a 149 minute running time?  I could spend the rest of this review providing background information on each hero and have no room for anything else.  We’ve got Iron Man, Thor, Hulk, Captain America, Black Widow, Dr Strange, War Machine, Spider-Man, Black Panther, Vision, Scarlet Witch, Falcon, Loki, Star-Lord, Gamora, Rocket… and the list goes on.

Don’t ask me how but writers Christopher Markus and Stephen McFeely (who were behind the three Captain America movies) have crafted a worthy storyline for this much-hyped film.  Central to everything is the villain, Thanos (Brolin).  He’s on a quest to locate six Infinity Stones that have been spread across the galaxy and once in his control, he will harness a power that cannot be rivalled.  His motives are a bit wishy-washy but his end goal is to annihilate roughly half the universe’s population to put a dramatic halt to its unsustainable growth.

You won’t see all the superheroes sitting together in a meeting room and formulating a well-thought out plan.  Thanos has the upper hand from the opening scene and it’s the heroes who are struggling to stay on top of the chaos that follows.  Unexpected teams are formed and whilst some our beloved protagonists remain on Earth, others have to travel to the far corners of the universe with important tasks to complete.  It’s compelling stuff but there is a repetitive vibe to the moral quandaries that many of them face (e.g. choosing the life of one friend over a million strangers).

With a reported cost of $300-$400 million USD, Avengers: Infinity War is one of the most expensive films ever made.  The cast wouldn’t have come cheaply but it’s apparent that much of the budget went into the action scenes and to the gifted stunt people, sound engineers and visual effects artists.  The variety of the action, combined with the intense music score from Alan Silvestri, should keep you alert for the full duration.

Given the number of people involved in the production (the end credits feel like they go forever), it’s amazing to think that the many plot twists have been protected right up until the day of release.  The cast have been active on social media and asked audiences not to spoil the movie for others so that all fans can experience it firsthand.  It’s a fair request.  The finale alone is a game changer for the genre and will keep audiences guessing and internet forums buzzing until the next instalment (which was filmed at the same time) is released in May 2019.  I’ve got a few theories but that’s all I’ll say for now.