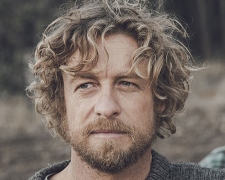 Most young actors in this country would love to put together a resume to equal that of Australian Simon Baker.  He began his career in the early 1990s with roles in local TV shows such as E Street, Home and Away and Heartbreak High.  He then set sail for America where he earned supporting roles in feature films including L.A. Confidential and The Devil Wears Prada.  His biggest break came in 2008 when he landed the lead in The Mentalist – a successful American show that ran for 7 seasons and earned him nominations for a Golden Globe and Screen Actors Guild Award.

Skimming through his list of credits on the Internet Movie Database, there’s one curious statistic that stands out – Baker has never appeared in an Australian feature film.  It’s hard to believe given he’s a home grown star who has been in the business for a quarter of a century.  That streak comes to an end with Breath, an adaptation of the Tim Winton novel first published in 2008.  That’s not the only milestone.  Baker has directed a handful of episodes for the small screen but Breath marks his debut as the director of a full length feature film.

His attraction to the project ties back to his upbringing in the seaside town of Ballina and his passion for surfing.  It’s the fictional tale of two 13-year-old boys who are about to learn that life is far more complex than they’ve imagined.  Pikelet (Coulter) is an only child who is introverted by nature and doesn’t get up to much.  You get the sense that the highlight of his day is coming home and learning his mum has cooked chops for dinner (accompanied by a cold glass of milk).  Loonie (Spence) is the complete opposite.  He’s an energetic risk taker with a relentless sense of an adventure and a mouth that never shuts up.

With no responsibilities and with plenty of spare time to fill, these two best friends discover the art of “dancing of water” through a former surfing champion, Sando (Baker), who lives quietly in the area with his long-time partner, Eva (Debicki).  With no children of his own, Sando takes “Heckle” and “Jeckle” under his wing and it’s not long before the trio are travelling up and down the coast in search of the perfect wave.  There are some great surfing sequences and it’s fun to watch these kids overcome their fears and harness their obvious natural talent.

There’s considerably more to this story however and things take a dramatic shift (without giving too much away) during the second hour.  Credit must go to the two teenage leads, Samson Coulter and Ben Spence, who deliver strong, natural performances despite having next-to-no acting experience prior to the movie.  You can see their characters transform as key events unfold.  No special effects or camera trickery was needed to shoot the scenes on water given that both have been surfing competitively since a young age.

Whilst it will get audiences thinking about its tougher subject matters, Breath does leave you wanting more in places.  A successful skier who saw her career cut short by injury, Eva the most intriguing character.  She comes across as aimless and unhappy but it’s hard to fully understand her psyche given she plays second fiddle (in terms of screen time) to her male counterparts.  I was also hoping to see more interaction between Pikelet and his parents (played Richard Roxburgh and Rachael Blake) as he starts to pull away and discover his independence.

Set in the 1970s and shot in a sleepy town on the southern coast of Western Australia, Breath is an engaging coming-of-age tale that many connect with.

You can read my interview with Simon Baker, Samson Coulter and Ben Spence by clicking here.