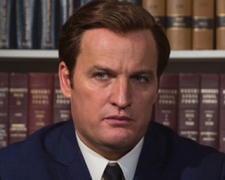 If you’re unfamiliar with United States politics, Senator Ted Kennedy was the younger brother of the late John F. Kennedy and in the late 1960s was touted as a possible Democratic candidate for the Presidency.  That changed on the evening of 18 July 1969 when he was involved in a single vehicle car accident on Chappaquiddick Island.  The car, which Kennedy was driving, went off a narrow bridge and finished upside down in a shallow body of water.  Kennedy escaped the vehicle but the woman in the passenger seat, a 28-year-old campaign specialist by the name of Mary Jo Kopechne, was trapped and did not survive.

Directed by John Curran (Tracks), the first half of Chappaquiddick provides background information on Kennedy (played by Jason Clarke) and chronicles the night of the accident.  Some facts are indisputable.  For example, we know that Kennedy did not report the accident to the local police until 10 hours after it occurred.  Other details are sketchier.  Did Kopechne drown instantly or did she survive the crash and die of suffocation while waiting to be rescued?  Was Kennedy drunk at the time?  Curran’s film hedges its bets by offering alternate viewpoints (such as the contrasting views of two doctors).

The second half of the movie is an exercise in how to bungle a cover up.  Kennedy’s close advisers, including former Secretary of Defence Robert McNamara, do everything in their power to protect Kennedy’s career.  The truth becomes irrelevant.  It’s all about crafting a credible story that keeps their man in the clear and which could be believed by the authorities and the public.

This works to an extent.  Kennedy has a natural charm and believability.  We seem him talking to the police, his secretaries and his friends and they blindly accept his version of events.  The same goes for the parents of Kopechne who are heartbroken by the death of their daughter but don’t see the need for an autopsy given Kennedy’s assurances about what happened.  The fact the accident occurred at the same time as the Apollo 11 moon landing was another stroke of good fortune in keeping it off the front page of newspapers.  Things start to unravel though when Kennedy makes a few conflicting statements and a group of inquisitive journalists start asking tough questions.  The focus turns to damage control.

I’m always fascinated by political elections and the key issues that influence voters.  Some have staunchly partisan views and will support the same political party of their entire life regardless what policies are proposed.  Some swing from election-to-election and will look more closely at policies and the performance of the incumbents.  Others don’t care at all and won’t even make the time to turn up to the polling booth and vote.

There’s a poignant sequence at the end of Chappaquiddick which includes interviews from American voters weighing in with their thoughts on Ted Kennedy in in the aftermath of the accident.  Many were prepared to forgive and forget about his actions.  It makes you wonder if these people would have the same view if a different politician was involved or if those behind Kennedy hadn’t spun up an alternate version of the “truth”.  There’s plenty of food for thought.  It also feels eerily relevant today given the current U.S. President is quick to deride attacks against him as “conspiracy theories”.

I wasn’t fully convinced by the lead performance of Australian Jason Clarke.  There are moments where his character is so dumb but others where he is so shrewd.  Still, this is a compelling, eye-opening true story with a worthy punchline as the credits start to roll.

You can read my interview with director John Curran by clicking here.