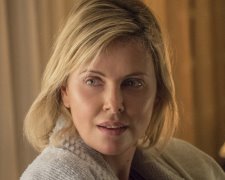 For those keeping score at home, Tully marks the third collaboration between director Jason Reitman and writer Diablo Cody.  They first paired up in 2007 with the brilliant coming-of-age comedy Juno, the story of a sarcastic teenage girl (Ellen Page) and her unplanned pregnancy.  Cody won an Academy Award for her original screenplay.  That was followed in 2011 with Young Adult, the absorbing tale of a 30-something year old woman (Charlize Theron) battling depression who tries to rekindle memories from her high school years.  Both films are “must see” viewing.

Cody solidifies her reputation as one of the best writers in the business by creating another great character in Tully.  Her name is Marlo (Theron) and she’s a struggling mother with two kids and another on the way.  She’s tired, she’s overworked and she’s lacking in self-confidence.  There’s a humorous moment where Theron, who put on more than 20 kilograms for the role, describes her sagging body as looking like “a relief map for a war torn country.”

The biggest problem for Marlo is that she’s getting next-to-no support.  Her husband works long hours and whilst he thinks he’s loving and caring, that’s not really the case.  He spends more time in the bedroom playing video games than talking to Marlo about her day.  Adding to their troubles is the fact their eldest son has learning difficulties and his teachers, who describe him as “out of the box”, think he’d be better suited by one-on-one tutoring.  This is something they clearly cannot afford.

Marlo is reluctant to ask for help but following the birth of her third child, she accepts the financial assistance of her brother (Duplass) and employs a “night nanny” named Tully (Theron).  I wasn’t familiar with the job previously but it refers to a person who comes into the home and looks after a newborn child during the night so the parents can take a break and rest.  Tully is more than just a night nanny though.  She’s a breath of fresh air who uproots the household in a manner similar to Mary Poppins.  She cleans the house, organises all the kids, and becomes an invaluable friend to a reinvigorated, charged up Marlo.

So where is all this going?  That’s a question I wrote in my notebook as the film moved into its curious final half-hour.  There’s more to this narrative than you think and so the plot developments are best left unspoiled.  Central to everything is the terrific performance of Charlize Theron (Monster).  I can’t directly relate to her scenario but you can see from her facial expressions and body language that she’s in desperate need of help and companionship.  This is a worthy character study and it’s hard not to feel sympathy towards Marlo and her plight.