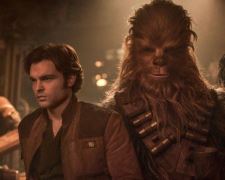 Disney had a lot to lose when it purchased Lucasfilm in 2012 for the sum of $4 billion USD.  It all comes down to numbers.  The average Star Wars film has a production budget of around $250 million.  When you throw in marketing and overhead costs on top of that, you’re in a position where a film needs to pull in some serious coin to make a profit – whether it be in ticket sales, DVD sales, TV rights or merchandise.

Solo: A Star Wars Story is the 4th film to be released since the acquisition and while the last 3 have been hugely successful (they’ve grossed a combined $4 billion), this movie had Disney worried.  Directors Phil Lord and Chris Miller (The Lego Movie) were fired by producer Kathleen Kennedy midway through the shoot due to “creative differences” and replaced by Ron Howard (A Beautiful Mind).  There were also rumours that star Alden Ehrenreich (Hail, Caesar!) needed an acting coach and was struggling to recreate the character made famous by Harrison Ford in the late 1970s.

I’m not sure who ultimately deserves the credit given the director change but Solo: A Star Wars Story, as a finished product, is an entertaining film.  We learn how Han Solo got his name, how he met Chewbacca, how he first fell in love, and how he came into possession of his coveted starship, the Millennium Falcon.  You don’t need to be a Star Wars devotee to understand what’s going on.  This works as a standalone feature.

For those already familiar with these characters, the film sits on the Star Wars timeline somewhere between Episode III and Episode IV.  We’re told it’s a “lawless time” with the galaxy overrun by crime syndicates in search hyperfuel – an extremely powerful energy source that is in short supply.  The film’s best action sequence arrives at the end of the opening act.  Working under a blood thirsty crime lord named Dryden Vos (Bettany), Han teams up with his quasi-girlfriend, Qi’ra (Clarke), and a shady criminal, Tobias Beckett (Harrelson), to steal a shipment of hyperfuel from a fast-moving train.

The run time is a lengthy 135 minutes but there’s more than enough material to hold your attention.  In fact, one could argue more time was needed to expand on key subplots.  Qi’ra and Han spend three years apart but when they finally get back together, it’s odd that neither wants to talk in detail about her past and newfound allegiance to Dryden Voss.  Some action scenes are also rushed such as an encounter with a space monster.  It’s over before there’s even a chance to get the heart racing.

These nit-pickings are relatively trivial though.  He may not have perfected Harrison Ford’s personality from the earlier movies but Ehrenreich brings a distinctive hairstyle and easy-going nature to the title role.  He’s well supported by a great group of actors.  It terms of a stand out, it’s hard to go past Phoebe Waller-Bridge who plays a sassy, feminist robot who has fallen in love with her master and has views of changing the world.

The last few Star Wars films have had a darker tone and while I expect that trend to continue with the untitled Episode IX, due to be released in late 2019, Solo: A Star Wars Story tips the scales back in the other direction and is a fun, likeable adventure.