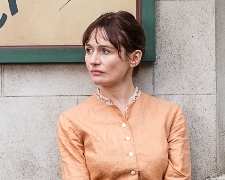 We’ve all found ourselves involved in debates over petty, trivial things.  It’s normally not worth arguing about but you can’t help yourself and are prepared to waste the time.  That’s pretty much my summation of narrative in The Bookshop, the latest film from Spanish director Isabel Coixet (The Secret Life of Words, Elegy).

Set in a British seaside town in the late 1950s, Florence (Mortimer) is a middle-aged woman who has been widowed since World War II and is looking to pour her energy into something new.  She’s loved reading since a young child and so, having learned the trade as a child, she acquires a rundown property (known as the “Old House”) and opens a small bookshop.  Her business strategy is sketchy.  She’s told that virtually no one in the small town reads books and so it’s no surprise that her bank manager, portrayed as a villain, is nervous.

The store appears to be profitable in its early days.  I’m not sure how since Florence and her teenage assistant (Kneafsey) spend more time reorganising and dusting shelves than selling anything.  We do meet one customer however.  Edmund (Nighy) is a hermit who has locked himself away in a hilltop mansion and reads all day long.  He’s too scared to come into the shop and so Florence makes selections for him and has the books personally delivered.

Things go further awry with the introduction of Violet Gamart (Clarkson), a wealthy socialite who is unhappy with Florence’s bookshop and use of the Old House.  She’d rather the property be transformed into an arts and cultural centre.  That in itself makes less sense than the bookshop but it evolves into a pointless battle between the two.  Violet uses all her connections in the town to destroy Florence’s business so that she will be forced to sell the property and give up on her dream.

That’s pretty much it.  This is a two-hour fight over whether a rundown building should be a bookshop or an arts centre.  Adapted from the novel written by Penelope Fitzgerald, Coixet struggles to create anything interesting.  The dialogue between the characters is stiff and unnatural.  The worst of the bunch is James Lance who plays a hopeless, slimy BBC journalist who earns Florence’s trust despite being a jerk for the entire film.  One way he sabotages the business is by putting a “closed” sign in the store window when it’s actually “open”.  That’s the kind of silly stuff we’re talking about here.

Things get even stranger when Violet lobbies for legislation changes in parliament to help get Florence evicted.  Does the arts centre mean that much to her?  Or is just a crazy power grab?  It’s hard to say given we know so little about Violet and her background.  The same can be said for most in this ensemble though.  Violet’s clueless husband pops up in two scenes with nothing to offer.  The journalist’s girlfriend is introduced and then disappears in a matter of minutes.  The strangest character in the mix is the narrator who chimes in at unnecessary times to explain Florence’s obvious mindset and other unnecessary details.

Emily Mortimer, Patricia Clarkson and Bill Nighy are all accomplished actors but their talents are not enough to save this confusing mess.