Review: Tea with the Dames 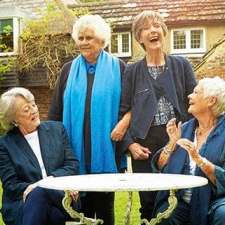 South African born director Roger Michell has made some terrific films including Morning Glory, Changing Lanes and Notting Hill.  That said, he’s never made a more intimate film that this one.  Tea with the Dames is a documentary that brings together four of Great Britain’s greatest living actresses – Joan Plowright, Maggie Smith, Judi Dench and Eileen Atkins.

It was shot over a weekend at the home in Sussex shared by Plowright and her late husband, Laurence Olivier, since the 1960s.  It’s a relaxed “fireside chat” with each reflecting on their long and successful careers and from that, Michell has taken the best conversations to create a tight-knit 84 minute film.  It’s seldom dull.  It’s wonderful to hear these women speak so openly whilst also being treated to archival footage of their early performances dating back to the 1950s.  There’s a funny scene where Dench can’t even recognise herself when shown the material.

Over the course of the movie, they discuss a surprisingly broad range of topics.  They touch on the early part of their careers including how they all first met, how they were introduced to the theatre, how they deal with nerves and how they tackled iconic roles in Shakespeareans plays.  As the film progresses, they touch on their lives today including interaction with their families, negative reviews, and the battles of old age.

They each have a distinctive personality but it’s hard to go past the sarcastic sense of humour held by Dame Maggie Smith.  She’s strong-willed and isn’t afraid to express an opinion – a trait she’s possessed her entire life as evidenced by an old television interview we see.  There’s a funny conversation during the doco where she reflects on performances in the Harry Potter franchise and on Downton Abbey which have made her a household name around the world.

With the greatest of respect to Plowright and Atkins who are little more subdued, it’s Judi Dench who deserves to share MVP honours alongside Smith.  She’s such a great story teller and this is illustrated when sharing her experiences about a young paramedic on set.  She’s also not afraid to tell it as it is – humorously arguing that being knighted by the Queen gives her even more justification to slip an F-bomb into casual conversations.

The film is being released in Australia as Tea with the Dames but I much prefer the British title, Nothing Like a Dame.  It makes it sound more comedic and less formal – which is exactly how the finished product comes across.  It’s getting a short cinema release in select countries across the world before going straight to TV.  It may not sound like “big screen” material but it’s nice to see it in the company of an admiring crowd who, if my preview was anything to go by, should be laughing openly.

These four talented women have won Oscars, BAFTAs, Tonys, Emmys, Golden Globes and SAG Awards.  You don’t have to be familiar with all of their work to appreciate their experience and the words of wisdom they impart on the audience.