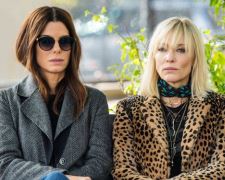 Hollywood has a new formula that it’s putting to the test – take a famous movie with an all-male cast and remake it with an all-female cast.  We saw it in 2016 with Ghostbusters and we’re likely to see it again in the next few years with planned reboots of Dirty Rotten Scoundrels, Lord of the Flies and The Expendables.  In the meantime, we’ve got Ocean’s Eight – a spin-off from the original Ocean’s Eleven released in 1960 and subsequent remake in 2001.  Some will see it as an exciting move forward in terms of female-led movies.  Others will see it as a lazy writing and question why such a great cast weren’t deserving of an original concept.

There is an overlap with the earlier movies as we learn during the opening sequence.  Debbie Ocean (Bullock) is the youngster sister of Danny – the character played by George Clooney who orchestrated a series of heists in the last three movies.  Debbie has just been released after a 5 year stint in prison for fraud and, despite what she tells her parole officers, she’s geared up and ready to commit more crimes.  When asked by a colleague why she’s doing it, her answer is simple – “because I’m good at it.”

There is another reason and it’s an obvious one – money.  Declaring that “banks are boring”, Debbie spent her time in prison crafting an unorthodox crime.  Locked deep underground in a safe at the Cartier store in New York City is a 6 pound diamond necklace valued at roughly $150 million.  It’s so valuable that it hasn’t been released and seen in public in more than 50 years.  With acclaimed actress Daphne Kluger scheduled to wear the neckless to the famous Met Gala, Debbie teams up with a diverse group of female criminals to infiltrate the Gala and pull off the perfect heist.

Her team is headlined by an old friend (Blanchett) and consists of a jewellery maker (Kaling), a computer hacker (Rihanna), an acclaimed fashion designer (Carter), a cunning thief (Awkwafina), and a mother who knows how to get things (Paulson).  All have important skills which will be called upon when the time is right.

I love a good heist flick and this is a cool concept but Ocean’s Eight struggled to keep me interested.  Character development is kept to a minimum with much of the screen time devoted to watching these women plan and execute the robbery.  That may be satisfying enough for some but it feels inferior to great heist movies including A Fish Called Wanda, The Thomas Crown Affair and The Italian Job.  It’s lacking when it comes to villains and backstabbers and it all feels too easy as we watch events unfold.  It needed a bigger injection of laughs and tension.

That’s not to say you won’t be entertained.  The cast is fantastic with everyone doing their best to stand out and create a memorable character.  It’s hard to pick a favourite which is a testament to their respective talents.  In terms of the supporting players, keep your eye out for a few cameos at the Met Gala with famous celebrities playing themselves.  James Corden also deserves a mention as a humorous insurance investigator with a part to play during the final act.

So where to from here?  Will we see an Ocean’s Nine in a few years’ time?  I’d be up for that if we could add a few more twists to the screenplay.