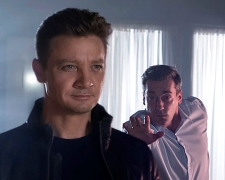 Five adult guys playing a game of tag.  That’s the premise behind the latest release from Warner Bros. Pictures.  They played the game as children and they’ve never really grown up.  They even have a detailed rule book which has evolved since the 1980s and contains simple conditions such as “you can’t tag the person who tagged you.”  Another key rule is that the game only takes place in the month of May each year.  Suffice to say you don’t want to be the last person tagged because you’ll have to wait another 11 months to be rid of it.

This isn’t some fun thing these guys do on weekends.  We see their passion illustrated in the opening scene.  Hoagie (Helms) is desperate to tag his mate Bob (Hamm) but can’t get through the tight security at Bob’s high rise office building.  So what does Hoagie do?  He applies for a janitor’s job at the company, gets a staff pass, puts on a disguise, and interrupts Bob while in an important meeting.  It’s a huge amount of effort but Bob is ultimately tagged and the cycle continues.

Does this sound silly, far-fetched and unrealistic?  That was my first reaction to the plot but you may be surprised to know this is based on a true story.  It was all revealed in an article in the Wall Street Journal in 2013 when the new chief marketing officer at a leading fashion retailer told the story to a journalist.  The men are now in their 40s but the game is ongoing and much of what you see in the film was created from events that actually took place.  You’ll even see video footage of the real guys during the closing credits.

I’m not sure how this would have worked as a documentary but it had the potential to be more interesting than this over-dramatised re-enactment.  Screenwriters Rob McKittrick and Mark Steilen have tried to spice things up by introducing a quasi-villain named Jerry (Renner) who, despite having played the game for so long, has never once been tagged.  He’s always been too competitive, too fast and too smart for the others in the game.

The guys learn that Jerry is to be quietly married in the month of May (an odd but convenient date choice given the rules of the game) and so they all head back to their home town in Washington and put together an elaborate plan to tag him for the first time.  They are joined by a journalist (Wallis) who is interested in writing a story about their bizarre game.  The end result is large scale hijinks with everyone trying to outsmart the other and remain tag-free.

I’ll be honest – it’s hard to believe that 4 people and a few others offering support can’t find a way to tag one guy over a 30 year period!  To try to make his character appear credible, we’re given insight into his sharp mind using narration and we also see him use an array of ninja-like escape acts that give him the appearance of a Marvel Comics superhero.  It’s just a bit too weird and over-the-top.

There are other elements to the screenplay that are undercooked.  An example is a love triangle that develops between two of the men and an old childhood sweetheart but her character adds next-to-nothing to the broader narrative.  The same can be said of the journalist who looks like a stunned bystander for most of the movie.  It makes you wonder why the character was included in the first place.

I’d suggest you read the original Wall Street Journal article about these people but if you’re still keen to see the movie, keep your expectations in check.