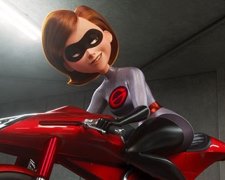 I went to an opening night screening of the Incredibles 2 here in Brisbane and on walking into the cinema, my first observation was that adults were abundant and kids were few and far between.  That shouldn’t come as a surprise to those familiar with the original.  The Incredibles was the 4th highest grossing film of 2004, it won two Academy Awards including best animated feature, and was watched again and again on DVD by children around the world.  Those kids have now grown up and will be contributing heavily to the box-office of this much anticipated sequel.

So what made the first movie so good?  Firstly, it was a fun superhero flick that combined fast paced action with family dynamics.  These heroes may have powers that allow them to save the world but they find it just as difficult as a regular person to juggle responsibilities at home.  There were some great arguments between the inflexible father, Mr Incredible (Nelson), and his argumentative teenage daughter, Violet (Vowell).  Secondly, it highlighted that superheroes can rescue as many people as they want but they won’t be universally loved.  Mr Incredible saved a man falling from a high-rise building but was later sued because it turns out the guy wanted to commit suicide!

Incredibles 2 follows closely in the footsteps of its predecessor and explores similar themes.  Mr Incredible and his wife, Elastigirl (Hunter), arrive on the scene to prevent the evil Underminer from robbing the vault of a major bank.  The stop the crime but there’s huge collateral damage with wrecked cars and smashed infrastructure.  On top of that, the Underminer gets away.  It leaves the public asking more questions about whether the pros of superheroes outweigh the cons.

Looking to win the public relations battle, Elastigirl accepts a job with DEVTECH, a leading telecommunications company that supports the superhero cause.  They install state-of-the-art cameras on her latex suit so that all her heroic actions can be filmed and broadcast to the world.  This will be helpful if her actions are ever questioned.  As all of this goes on, Mr Incredible has reluctantly become the caregiver at home.  It’s his job to feed the kids, get them off to school and assist with their homework.  The fact their infant baby is discovering his own superpowers makes life even more stressful and adds to his sleepless nights.

Sequels often feel inferior to the original but that’s not the case here.  Writer-director Brad Bird has returned to create a worthy, interesting story that befits the era we live in.  It’s cool to think that an animated feature about action heroes also has time to make some important observations about father-daughter relationships and a husband feeling weak because his wife is the major breadwinner of the household.  There’s a lot at play here and a lot for audiences to digest, whether they be kids or adults.

Turning to the technical elements, the animation is fantastic and so too is the music score from Pixar stalwart Michael Giacchino (Ratatouille, Up, Star Trek).  It’s a soundtrack that will soon be added to my collection.  The voice cast have all returned from the first movie with Craig T. Nelson going through a draft of emotions as the father and Samuel L. Jackson getting some great one-liners as another of the superheroes, Frozone.  Brad Bird also reprises his role as the aging fashion designer, Edna Mode, in a particularly good scene.

It’s been a 14 year wait for Incredibles 2 and if this film is as popular as I think it will be, we won’t be waiting as long for a follow up.