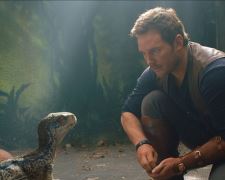 In November 1990, American author Michael Crichton published a fictional novel about a theme park with genetically engineered dinosaurs.  Few would have envisioned the reach it would have around the world.  We’ve now had 5 movies, several videos games, and a theme park ride at Universal Studios in Hollywood (which belts out John Williams’ iconic film score through the speakers as you arrive).

It’s been a good run but the question must be asked – has the Jurassic World film franchise reached its peak?  There are some worthwhile action sequences here but for the most part, this is a tired looking movie with a lacklustre plot.  Picking things up several years after Jurassic World (2015), it opens by presenting a moral dilemma.  The last remaining dinosaurs on the planet now live without human contact on a small island off the coast of Costa Rica.  Sadly, a volcano is set to erupt which will obliterate the island and kill the last of these giant creatures.

So what’s the plan?  One school of thought is to have nature take its course and let the dinosaurs die out.  They’ve been problematic since first regenerated and perhaps this is nature’s way of restoring balance.  On the flip side, there’s a some who want to save the dinosaurs and believe that future generations should have the chance to see and study these incredible creatures.  The government takes the first view while a group of dinosaur-rights activists, led by Claire Dearing (Howard), take the second view.  They accept finance from a wealthy scientist (Cromwell) to help rescue the dinosaurs and transport them to a safe sanctuary before it’s too late.

There are several problematic elements to the story and topping the list are two “bad guys” played by Rafe Spall and Toby Jones.  They’ve crafted an illogical plan to steal the dinosaurs and sell them on the black market for an insanely high price.  They’ll pulled together a group of influential heavyweights, motivated solely by power and money, for a fast-paced auction at a secluded mansion.  It’s a laughable scene with no nuance to the characters whatsoever.  The ideas of these one-note villains are so dumb and clichéd they belong in a Scooby Doo cartoon.

It’s not all bad news though.  Director J.A. Bayona (The Impossible, A Monster Calls) has created a number of cool escape sequences.  The pick of the bunch comes early in the film when the original island is about to explode and our beloved heroes are trying to evade a fast-flowing river of lava in addition to the dinosaurs and hunters.  Another notable scene features Bryce Dallas Howard and Chris Pratt as they try to extract blood from a sedated creature in a confined space.

The film sticks with the tone of its predecessors and shies away from violence.  Whilst some folk won’t make it to the end alive, we’re not shown any of the deaths in graphic detail.  The visual effects teams have done a stellar job and when you hear the sound of dinosaurs creeping across wooden floorboards, complete with their sharp nails, you’ll have an appreciation of the work performed by the sound engineers.

We will see more from this franchise as a 6th film is scheduled to be released in 2021.  That fact will be obvious when you see the cliff hanger finale in Fallen Kingdom which, like most of what precedes it, doesn’t make a lot of sense.  Am I supposed to be cheering for these heroes?  Or hoping they die like everyone else?