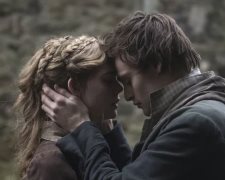 When it comes to fictional monsters, Frankenstein will be known to almost everyone.  The story has endured and the character continues to be used in films and television shows.  A lesser known fact (at least based on people I’ve spoken to) is that Frankenstein was the creation of British author Mary Shelley.  It’s incredible to think she was just 20 years of age when her book was published for the first time in 1818.  That would be impressive in today’s age let alone the chauvinistic, male-dominated world in which she was raised.

Fascinated by Mary Shelley’s story and keen to see it brought into the spotlight, Brisbane-based writer Emma Jensen obtained government funding and spent several months formulating a screenplay.  The reins were then handed over to Saudi Arabian director Haifaa al-Mansour (Wadjda) who cast Elle Fanning (Maleficent) in the lead role and got the cameras rolling.  The production highlights the multi-cultural nature of today’s society – an Australian writer, a Middle Eastern director and an American actress working together to tell the tale of an acclaimed British author.

As we learn during the opening scenes, Mary’s love for literature didn’t arise by chance.  Her mother, Mary Wollstonecraft, was a published writer and passionate women’s rights advocate.  Her father, William Godwin (Dillane), was a social philosopher and political journalist who pushed strongly for individual freedoms.  Borrowing from a recognised Godwin quote, there’s a nice moment where Mary is told by her dad that “to love reading is to have everything within your reach”.

She may have been shaped by her parents and her favourite authors but Mary was quick to find her own voice as sought independence.  At the age of 16, she fell in love with Percy Bysshe Shelley (Booth), a young poet she first met while studying in Scotland.  Their relationship caused much scandal given Percy was a married man but the strong-willed Mary trusted her heart and wouldn’t be swayed by naysayers.  It reached the point where she was kicked out of the family home by her father and forced to move in with Percy and her younger sister, Claire (Powley).

It was during her early years with Percy that the idea of Frankenstein took shape.  The world had seen nothing like it before and, as articulated in the book’s introduction, she was keen to create something that would “curdle the blood and quicken the beatings of the heart.”  Aside from those already mentioned, two other individuals had a small part to play in Mary’s life before putting pen to paper – renowned poet Lord Byron (Sturridge) and budding writer John William Polidori (Hardy).

The pace is a little sluggish in places but the interaction between key characters is the film’s strongest element.  With Mary and Percy, we can see that they were both good for each other and bad for each other.  In the case of Mary and Claire, we see the bond between two sisters strained as they grow up and the world changes around them.  Elle Fanning embodies the role of Mary and deserves big wraps in helping illustrate these complex relationships.  Tom Sturridge also deserves a mention for his humorous, unexpected cameo as Lord Byron.

The creation of Frankenstein and the links between the book and Mary’s life aren’t explored in as much detail.  Perhaps this had to be sacrificed to keep the film to a two-hour running time.  Still, there is a worthy punchline with the film having something to say about the connection between misery and art.