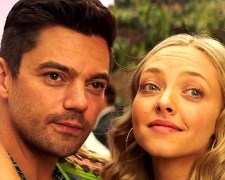 It’s hard to believe that 10 years has passed since the original film was first released in cinemas.  The time has flown.  Expensive Hollywood musicals have been seen as risky ventures in recent decades but Mamma Mia! was a fairly safe bet.  It was based on the popular stage show that debuted on West End in 1999 and had been performed countless times across the globe.  It also featured iconic songs from ABBA which had been sung and celebrated since the 1970s.  The movie grossed over $600 million USD at the world wide box-office – a record for a live-action musical (until Beauty and the Beast came along last year).

A little more effort was required to bring this new film to life.  For starters, there was no source material.  Playwright Catherine Johnson, who created the original stage musical, teamed up with screenwriters Richard Curtis (Love Actually) and Ol Parker (The Best Exotic Marigold Hotel) to craft a fresh tale that could be interwoven with other well-known ABBA songs.

The end result is something that’s both a prequel and a sequel.  Part of the movie is set in the past.  We go back to the year 1979 and learn how a young Donna (James), fresh out of college, built an adventurous, carefree life for herself on an idyllic Greek island.  It was at this same time that she had flings with three very different suitors looking to win her heart – Sam, Harry and Bill.  Oh, and of course she gave birth to Sophie, the daughter who is central to the whole story.

The other part of the movie is set several years after the events of Mamma Mia!  We sadly discover that Donna has passed away and to honour her memory, Sophie has taken her mother’s rundown Greek home, given it a fresh lick of paint, and transformed it into a holiday resort.  It’s aptly named the Hotel Bella Donna and Sophie has brought in a polite, well-groomed gentleman (Garcia) to help run it.  As the film begins, preparations are underway for the grand opening.

Mamma Mia! Here We Go Again brings back all of the original cast members (a tricky feat given their busy schedules) with one major addition that has been much hyped in the trailer.  Cher plays Sophie’s grandmother and she arrives during the final act like a refreshing summer breeze.  She provides a much-needed spark (I’d grown tired of the other characters by this point) and her beautiful rendition of the song ‘Fernando’ is the film’s most memorable music number.  It’s a shame she didn’t arrive sooner.

The narrative can be best be described as “choppy”.  Unnecessary detours have been thrown in as an excuse to sing particular ABBA songs such as the use of ‘When I Kissed the Teacher’ during the opening scene.  It also struggles in balancing up the two timeframes.  We continually jump back and forth to highlight the similarities between Sophie and her mother but the technique is overused.  The biggest head-scratcher are two bizarre sequences that take place in Tokyo and Stockholm.

The film does have its highlights.  It’s a rare movie where the supporting characters are more interesting than the leads.  British stand-up comedian Omid Djalili steals several scenes with his cameo as a Greek customs officer who is quick to dish out beauty advice.  He even gets a chance to sing but you’ll have to wait until the end of the closing credits.  Maria Vacratsis (My Big Fat Greek Wedding) also wins big laughs as the opinionated barwoman at a run-down drinking establishment.

I love musicals and I was a big fan of Mamma Mia! but I’ve got to be honest – this is a letdown.