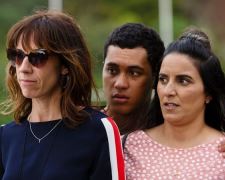 Writer-director Jackie van Beek has shared many conversations with friends about the difficulties of breaking up with someone.  It was those chats that inspired The Breaker Upperers – a warped New Zealand comedy put together by van Beek and her good friend, Madeleine Sami.  Iconic New Zealand filmmaker Taika Waititi (What We Do in the Shadows, Hunt for the Wilderpeople) is also on board as an executive producer and that’s no surprise given his love for this style of comedy.

I’m the first to admit this is a farcical scenario but Sami and van Beek still generate maximum laughs.  They play Mel and Jen – two middle aged women who make a living by helping customers break up with their partners.  You could try the “other woman package” for $1,000 where they’ll rock up out of the blue and pretend they’ve been having an affair.  Or, you could go with something more elaborate.  There’s an early scene where they impersonate police officers and tell a woman that her husband is missing and presumed dead.

Mel and Jen justify their bizarre business model by saying that they’re not breaking any laws and are simply “guiding two souls to inevitability.”  Let’s not beat around the bush though.  They’re awful people doing awful things.  Perhaps the heaviest moment sees them tell a husband and kids that their mother has died (which of course is not true).

The Breaker Upperers is a dark, dark comedy and many scenes will leave you with the conflicting emotions of laughter and shock.  Madeleine Sami and Jackie van Beek deliver the jokes with precision and it’s hard to believe they can keep a straight face.  The good news is that these two characters, without giving too much away, are required to seek redemption for their sins in the film’s interesting second half.  The narrative moves away from their flawed business model and becomes a tale of love and friendship.

As good our leading ladies are, the film’s star performance comes from James Rolleston (Boy) as an 18-year-old who ends up in a relationship with the 37-year-old Jen.  He deserves an Oscar nomination for creating one of the dumbest characters we’ve ever seen in the history of cinema.  As an example, he continually thinks that “Mel” is short for “Melon” and not “Melanie”.  You’ll fall in love with his cute innocence while also laughing at his head-scratching comments.

The film is probably a bit too ridiculous in places (such as a scene where they impersonate strippers) but The Breaker Upperers is a great choice for fans of edgy, outlandish comedy and it’s all wrapped up inside of a tight 90 minutes.  Celine Dion would love it.