Review: The Spy Who Dumped Me 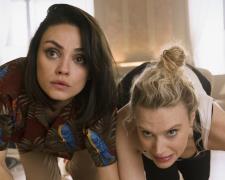 I’ve always wondered about people who work for organisations such as the CIA, MI6 or ASIO.  How much knowledge of their work do they share with spouses and family members?  In this fictitious comedy from writers Susanna Fogel and David Iserson, it’s apparent that Audrey (Kunis) is completely in the dark about her boyfriend, Drew (Theroux).  She thought he made jazz podcasts for National Public Radio.  It turns out he’s an undercover spy for the CIA who travels around the world, gathers intelligence, and stops bad guys.

Having not heard from him in several weeks, Audrey assumed she’d be unceremoniously dumped but the truth is soon revealed from two different sources.  Firstly, she is kidnapped and interrogated by two fellow spies who reveal Drew’s true identity and seek information as to his whereabouts.  Secondly, Drew rocks up at her apartment unexpectedly and before he has a chance to apologise and explain himself, a group of heavily armed men storm the place.

Things get a little complicated after that but we end up at a point where Audrey teams up with her best friend, Morgan (McKinnon), to become de facto spies and help Drew with an important mission.  They must travel to a café in Austria and deliver a package to an individual named Verne.  They have no idea what’s in the package but it’s clearly of value given the number of people who come after them – some trying to negotiate its exchange while others resort directly to violence.

The Spy Who Dumped Me may look like a silly comedy from the trailers and advertisements but it’s a film that mixes genres and does offer a few surprises.  There are some well-choreographed action sequences including a car chase (complete with an adrenalin-seeking Uber driver) and a restaurant shoot-out.  There’s a thriller-mystery element to the storyline given that Audrey and Morgan have no idea who they’re working for and who they can ultimately trust.  There’s also a dark undertone given its heavy violence (it’s rated MA in Australia) and a few unexpectedly deaths.  It’s offering a bit of everything.

The comedic elements are hit and miss.  Audrey and Morgan have no experience when it comes to international espionage and so the film finds humour in watching them bumble their way through each situation and rely on extreme good fortune.  As she did in Rough Night and Ghostbusters, Kate McKinnon has created a silly, not-so-bright character who wins laughs but making bizarre, head scratching comments.  Mila Kunis plays the more sensible member of the duo but gets to share in the one-liners by refuting her partner’s crazy ideas.  The pick of the supporting cast is Ivanna Sakhno who plays a former Russian gymnast who is now a part-time supermodel, part-time assassin.

The Spy Who Dumped Me could have been funnier but it’s prepared to take a few chances and so deserves a look.