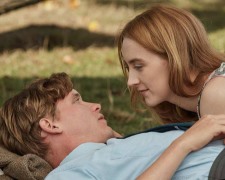 Having not read the source material from award winning author Ian McEwan (Atonement), I was surprised to discover that On Chesil Beach is an unorthodox love story.  The year is 1962 and Florence (Ronan) and Edward (Mayhew) are celebrating their first night as a married couple.  He’s rented a room at a quiet, seaside town in Southern England and after a stroll along the beach and a simple roast dinner, the pair head off to the bedroom to consummate the marriage.

They’re a likeable, young couple but it’s clear that both are lacking when it comes to self-esteem.  They talk to each other in a rigid, polite manner and it’s as if they’re in constant fear of saying the wrong thing and offending the other.  It may seem laughable in today’s age but this was a very different period of history where self-help books and the internet didn’t exist.  The bottom line is that these two people are in love but they have no idea how to behave as a married couple.  She’s described as the “squarest person in all of civilisation” and he’s just a “country bumpkin”.

The film is littered with flashbacks but the focus isn’t so much on the relationship between Florence and Edward but rather, it delves into their upbringing and their families.  These scenes are designed to show why our two leading characters have such timid, reluctant personalities.  Florence is a well-educated violin player from rich, posh family.  Edward comes from a poorer background and has to deal with a sick mother suffering from the effects of a freak train accident.

This may sound like a strange premise for a movie but the crux of On Chesil Beach is watching these two harness the courage to have sex for the first time.  They’re both virgins and they’re both horribly inexperienced.  It’s hard to articulate exactly what is going through their heads but it’s a mix of nerves, excitement and reluctance.  Both love the idea of being together and starting a family (Florence has already picked out a name for their first child) but it’s clear they have a phobia when it comes to intimacy.

There’s an unnecessary epilogue but On Chesil Beach is still a moving character study about two people who struggle to express emotion.  Newcomer Billy Howle and three-time Oscar nominee Saoirse Ronan (Brooklyn, Lady Bird) both deliver exquisitely awkward performances that illustrate their character’s respective insecurities.  We may not all relate to their problems but it is hard not to feel sympathetic given their situation.

Dominic Cooke has made a name for himself in London’s West End and over the past two decades by directing a string of award winning productions such as The Crucible, Clybourne Park and Follies.  He’d always had a love of cinema but was waiting for the right script to come along before making the plunge into this particular medium.

With On Chesil Beach, he was lured in by the era (just prior to the cultural revolution of the late 1960s) and the compassion he felt towards these characters.  Also deserving praise is cinematographer Sean Bobbitt (12 Years a Slave) who highlights the expansive beauty of the location (it was shot at the actual Chesil Beach in Dorsett) while also using tight close-ups to capture the anxious facial expressions of both Howle and Ronan.

Receiving a limited release in Australia almost a full year after its world premiere at the 2017 Toronto Film Festival, On Chesil Beach is quality cinema.