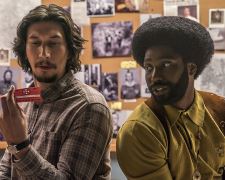 Enjoy a good true story?  If so, you’ll likely to be stunned by the latest from writer-director Spike Lee (Do the Right Thing) which is, according to the opening titles, based on some “fo’ real shit.”  The screenplay is drawn from the autobiography of retired police detective Ron Stallworth and chronicles one of his first assignments while working in Colorado in the late 1970s.

Stallworth had already made his mark by becoming the first African American police officer in the town of Colorado Springs.  That didn’t sit too well with some of his racist colleagues who were happy to see him posted in the dreadfully dull records department.  Determined to prove his value and break into the undercover detective ranks, Stallworth’s big break began with a phone call.  He saw a curious advertisement looking to recruit people for the Ku Klux Klan (KKK) and he decided to give the phone number a call to learn more.

Over the coming weeks, Stallworth was able to put together a substantial file of information about the KKK and their secretive get-togethers in the area.  He’d call the chapter leader, Walter Breachway (Eggold) and was able to earn his trust by pretending to be an incredibly racist white guy.  When the time came to meet the KKK in person, Stallworth couldn’t go (for obvious reasons) and so he enlisted the services of the white Flip Zimmerman (Driver), his friend and fellow officer.  You’d think someone might catch on but those in this KKK chapter weren’t the brightest bunch.

Framing it both as a comedy and a drama, Spike Lee has created an uncomfortable ride.  The actors who play the KKK guys are scarily convincing and you won’t know how to react to their bigoted conversations.  Some will find humour in the absurdity of the situation as Zimmerman, skilfully played by Adam Driver, switches persona and takes racism to a scary level.  Others will be horrified by these people and their twisted view on the world.  As an example, Ashlie Atkinson will stun audiences with her portrayal as the wife of a KKK member.  There’s no adjective strong enough to describe her words and actions.

BlacKkKlansman also serves as a breakout movie for star John David Washington, a 34-year-old with an interesting background.  He grew up in Los Angeles, played both college and professional football, and is now transitioning into acting.  I guess it also helps to be the oldest son of two-time Oscar winner Denzel Washington!  He brings both a coolness and likeability to the lead role.  I certainly didn’t want to see him get caught at the stakes are raised in the second and third acts.

A few of the subplots lack impact.  Stallworth has mixed luck winning the affections of a young black student rights advocate (Harrier).  Their romantic, getting-to-know-each-other scenes are more formulaic and less interesting than the main show.  The sequences with the KKK members also get a touch repetitive but the introduction of infamous leader David Duke (Grace) adds a necessary dose of humour and momentum.

Likely to spark debate about how much America has changed… and not changed over the past few decades, BlacKkKlansman is a winning black comedy.