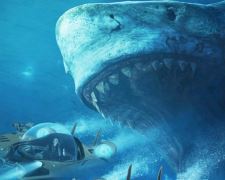 There are two ends of the spectrum when it comes to shark movies.  On one side, you have Jaws – a tense, credible thriller that preys on people’s fears and leaves them on the edge of their seat.  On the other side, you have Sharknado – a farcical, over-the-top comedy that pokes fun at the genre and is not intended to be taken seriously.

So where does The Meg sit on that scale?  It’s definitely headed towards the Sharknado end.  Those behind the production felt we’ve had enough shark thrillers in recent years and so the time was right to take a chance and do something different.  It’s a big Hollywood blockbuster with a large $150 million USD budget but it comes with a goofy script filled with intentional clichés… well, I hope they were intentional based on the laughs at the preview screening I attended.

Perhaps an example is in order.  A group of scientists have taken a submersible to the very bottom of the Marianas trench, the deepest part of the ocean, and been attacked by a giant prehistoric shark, known as a megalodon, which was thought to have been long extinct.  The submersible is damaged, they are unable to return to the surface and they have about a day’s worth of oxygen left before they’ll suffocate.

Those on the surface are quick to note there’s only one man alive who could pull off such a dangerous rescue and so they jump in a helicopter and head to Thailand to meet with Jonas Taylor (played by Jason Statham).  Jonas was once a renowned, well-trained rescue diver but after a mission didn’t go as planned, retirement became his preferred line of work.  He now sits on a beach, drink beers and watches the world go by.

He’s quick to assert is position that there’s no emotive hook or no amount of money that could convince him to come out of retirement and help.  Lo and behold, that all changes when he’s told… drumroll please… that it’s his ex-wife who’s stuck at the bottom of the ocean.  He’s jolted into action and after spending about 5 minutes learning how to use the highly technical rescue submarine, he sets off on his crazy mission.

I’m not giving away big spoilers as all of this is covered in the opening act.  I’ll admit to being entertained by the silly, trivial nature to the storyline and the way in which the writers have mocked the genre.  Jason Statham turns out to be a good fit for the lead role.  He plays the character with a serious, deadpan expression and that makes his character even funnier.  I don’t think the film would work as well if a straight-out comedic actor had been chosen.

It’s a worthy set up but the film does run out of gas.  A few characters end up as shark food (as expected), the jokes dry up, and it becomes a too serious.  If you’re still keen to see it, I’d suggest going along to a busy Friday or Saturday night session to enjoy the audience reactions.  When it comes to a movie like this, the bigger the crowd, the bigger the fun.