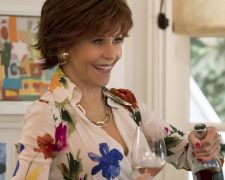 The story may be cheesy and contrived but it’s still great to see four terrific actors working together and creating comedy gold.  Of course I speak of Diane Keaton, Jane Fonda, Candice Bergen and Mary Steenburgen.  They play a group of sixty-something-year-old women who started a book club several decades ago and have kept it going ever since.  They meet once a month and, in addition to critiquing their latest literary assignment, they gossip about the goings-on in each of their busy lives.

I’m not sure what’s brought it on but, as if borrowing from the pages of Sex and the City, all they seem to be taking about lately is finding love and making love.  Diane’s (Keaton) husband passed away recently and she’s not sure if she has the desire to find another man.  Sharon (Bergen) has been divorced for 18 years and in that time, she’s spent 100% of her energy on work and 0% on her love life.  Vivian (Fonda) has an endless line of men at her disposal but she’s never married due to a fear of commitment.  Carol (Steenburgen) is the only one currently married within the quartet but she’s worried about her relationship given her husband (Nelson) shows little desire in the bedroom.

Bill Holderman has dabbled as a screenwriter (A Walk in the Woods) and a producer (The Conspirator), but Book Club marks his debut as a director.  He also co-wrote the script alongside colleague Erin Simms.  The film is at its best when these four accomplished women get together for their alcohol-fuelled meetings and talk about books such as Fifty Shades of Grey.  The funny one-liners are shared around with and it’s hard to pick a favourite given they’re all so good.

The film isn’t as strong when it comes to the supporting characters and subplots.  Diane’s two daughters treat their mother as if she’s an invalid.  They’re always telling her to be careful about what she does and where she should live.  It’s clear that Diane is more than capable of living a fun, rich, independent life but she never speaks up and so the daughters continue with their veiled insults.  It’s a narrow, repetitive storyline that drags unnecessarily for no particular reason other than to create more sympathy for Diane’s character.

The two writers also struggle when it comes to the finale.  It’s clearly a feel good piece where they want you to leave the theatre with a beaming smile on your face but it’s trying a little too hard in places.  Vivian has spent her entire life being a blissfully happy single woman (there’s nothing wrong with that) and so it’s hard to buy into her instant and sudden transformation after meeting a man (Johnson) from her past.

Qualms aside, there’s still a lot of fun to be had here.  I’d happily pay money to see Keaton, Fonda, Bergen and Steenburgen sit on a couch for two hours and discuss their lives in the same vein as the great British actresses in the recent Tea with the Dames documentary.  This isn’t quite as insightful but it’s still entertaining.