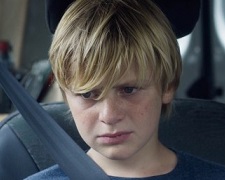 Frenchman Xavier Legrand has been a theatre actor since the age of 10 but his career took a seismic shift in 2013 when he made a 30-minute short film, entitled Just Before Losing Everything, about a mother trying to escape from her abusive husband.  Legrand won a César Award and also picked up an Oscar nomination for best live action short.  Not a bad directorial debut for someone who never attended film school!

Custody marks Legrand’s first feature film and is an intriguing project choice given he uses the same characters as his successful short movie.  It opens with a legal hearing in a small meeting room.  Miriam (Drucker) and Antoine (Ménochet) are a separated couple who, with the help of their respective lawyers, are arguing in front of a judge about who should be granted custody of their 11-year-old son, Julien (Gioria).  Each puts forward a persuasive argument but given inconsistencies in their stories, it clear that at least one side (if not both) is not being truthful.  The judge wraps things up by stating she will review their claims and make a decision at a future date.

The film is structured in a way that we, as the audience, become the jury.  This is the first time we’ve met these characters and we have no idea about their history and time together.  Rather than provide superfluous flashback sequences, Legrand wants us to form our own opinion as we observe Miriam, Antoine and Julien in the days following the custody hearing.  There’s a widely-held belief that it takes just seven seconds to make a first impression but you’re likely to need a lot more time than that to size up these individuals and their motives.

There’s a lot to think about here.  It’s a movie that delves into the complexities of a relationship breakdown when children get caught in the middle.  The 11-year-old Julien, beautifully played by newcomer Thomas Gioria, finds himself the unwilling participant in a game of emotional tug-of-war.  He’s old enough to understand the situation and form a view about which parent he prefers.  However, he’s still too young to appreciate the way he is being manipulated in pursuit of other goals.

Xavier Legrand uses a number of techniques to create a tense, uneasy experience for the viewer.  First and foremost is the lack of a composer.  Music is often used to subliminally guide our emotions (e.g. an ominous score means something bad is imminent) but the absence of music here will keep you on edge and unsure what’s around the corner.  The lengthy, observational nature of key scenes also adds to anxiety levels.  There’s a particularly powerful moment involving two characters in a darkened bedroom that serves as a great example.

Custody took home the prize for best director at the 2017 Venice Film Festival and is one of 5 movies shortlisted by the French National Film Board as the country’s entry into next year’s Oscars race for best foreign language film.  The unrelenting narrative and flawless performances make this a powerful piece of cinema.