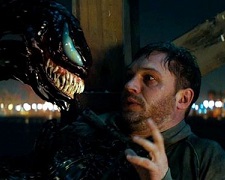 I wouldn’t describe Venom as a hero but I wouldn’t call him a villain either.  He sits somewhere in the middle and that fact alone makes him an intriguing individual.  He comes into existence when an alien life form infuses itself within the body of Eddie Brock (Hardy), a sacked journalist living in San Francisco.  What we’re left with is an interesting mishmash.  The alien tries to influence Eddie’s thoughts and actions but he’s not seeking full control.  He’s open to some of Eddie’s suggestions and the banter between the pair provides the film’s comedic backbone.

Unfortunately, he’s the only appealing character.  Michelle Williams (Brokeback Mountain) plays Eddie’s one-time girlfriend but has little purpose apart from being a concerned, helpful citizen.  Riz Ahmed (Four Lions) is the main “bad guy” but he’s just an over-the-top super villain with a dubious, illogical plan and a team of incompetent henchmen.  There are a handful of other characters but none have a strong screen presence.

The film’s major weaknesses is its screenplay.  So many sequences lack credibility.  Carlton Drake (that’s the villain) is an uber-rich guy with a futuristic research facility overlooking the Golden Gate Bridge.  He’s experimenting on alien lifeforms and performing other ground breaking research and yet, he’s dumb enough not to have security cameras in his labs.  This allows Eddie Brock to sneak in (with the help of a newfound friend) and come into contact with the alien for the first time.

More head-scratching moments arise from a subplot involving a second alien which infiltrates several humans in Malaysia before making its way to the United States.  This happened six months prior to the San Francisco storyline so how did the alien survive so long, what was it eating, and why weren’t any eyebrows raised about the trashed ambulance or the attack in the food market?  There were no shortage of eyewitnesses!

Tom Hardy (The Revenant) does his best to salvage the film and while some have been critical, I think he’s a good choice for the lead role.  He portrays Eddie Brock as a relaxed, carefree kind of guy who has a bit of fun with the alien.  This is best illustrated during a scene in a convenience store (without giving too much away) which adds one final laugh before the credits start to roll.  The visual effects guys also deserve praise in bringing these creepy, slimy aliens to life.

Venom is the first film in a new Marvel Universe being created and distributed through Sony Pictures.  It’s a rocky start but based on the two clips shown during the closing credits (one in the middle and one at the very end), there’s hope this could develop into something bigger and better.