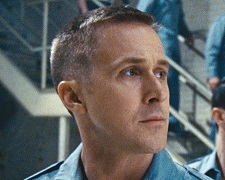 Spoiler alert!  This film ends with Neil Armstrong making a “giant leap of mankind” and becoming the first man to step foot on the surface of the moon.  I make that comment sarcastically because it’s one of the most widely known events in human history (well, unless you’re a conspiracy theorist).  The take away from First Man is therefore not a bleedingly obvious history lesson but rather, insight into who Armstrong was as a person and the decade of hard work that led to the famed Apollo 11 mission in 1969.

Oscar-winning screenwriter Josh Singer (Spotlight) faced an unenviable task in encapsulating Armstrong’s story inside of two hours.  Given he couldn’t speak to the subject himself (Armstrong passed away in 2012), he interviewed family members, advisers and former astronauts.  The most important source material came from writer James R. Hansen who spent more than 50 hours interviewing Armstrong before publishing his official biography in 2005.

Perhaps the most surprising detail we learn about Armstrong is that he while he was extremely driven in terms of career, he was a quiet, reserved individual.  I don’t think there’s a single scene in the movie where we see him raise his voice or express profound emotion.  When spoken to by the hungry media at a pre-launch press conference, you’d think Armstrong was simply on a mission to walk across the street such was his level of enthusiasm.  Ryan Gosling (Blue Valentine, The Big Short) delivers a restrained but powerful performance that captures these personality traits.

The focus is Armstrong but there’s still plenty to be learned about other characters in this big ensemble.  Claire Foy gives a heartfelt performance as Armstrong’s wife, Janet.  She’s supportive of her husband’s career but at the same time, she’s worried about the experimental, high-risk nature of the space program.  Corey Stoll is also great as Buzz Aldrin, Armstrong’s co-pilot on the Apollo 11 mission, and the film doesn’t shy away from their frosty, fractured relationship.

There’s a broader perspective too.  The film delves into the public’s opinion of the American space program and how it wasn’t universally appreciated.  There were protests (including chants of “Whitey’s on the moon”) by those who felt it was a significant waste of taxpayer money.  We also get to see what went on behind the scenes at NASA in terms of training and preparation.  As an example, there’s an eyebrow raising moment where a NASA director drafts a press release to be used if the astronauts don’t return safely.

33-year-old Damien Chazelle will add to his power in Hollywood with another outstanding directorial effort.  His last two movies were both nominated at the Academy Awards for best picture (Whiplash, La La Land) and First Man is odds-on to continue that impressive streak.  It’s beautifully shot.  The use of handheld cameras by cinematographer Linus Sandgren creates an enaging, documentary-like feel.

The film’s momentum is a touch sluggish during the middle stages but the emotion ramps up during the final act as Chazelle dispenses with all other perspectives and shows the entirety of the Apollo 11 flight from only Armstrong’s viewpoint.  There are no shots of his anxious wife or the busy mission control team.  It’s as if we’re in space and watching events unfold against the backdrop of a grand, memorable film score from composer Justin Hurwitz.

It’s “go for launch” in terms of this year’s Oscar season and First Man will be spoken about frequently over the coming months.