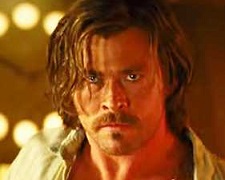 There are plenty of recognisable names on the film’s poster but the real star of Bad Times at the El Royale is the hotel itself.  Inspired by an actual hotel that once existed, the El Royale straddles the border between California and Nevada.  Each guest is given a choice – they can enjoy the “warmth and sunshine” of a room located in California or the “hope and opportunity” that comes with a room on the Nevada side.

It was once “Tahoe’s best kept secret” but the El Royale has fallen on hard times following the loss of its gaming licence.  With next-to-no guests, they have just a single employee, Miles (Pullman), who collects the money at the front desk and cleans the rooms when he has time.  He’s not particularly motivated as evidenced in the film’s introduction.

With the hotel completely empty, Miles is surprised by the arrival of a string of unrelated guests.  Jeff Bridges is a priest from Indiana on official business.  Cynthia Erivo is a struggling singer on her way to an unpaid job.  Jon Hamm is a busy appliance salesman who loves a chat.  Dakota Johnson is a young woman looking to keep a low profile.

Written and directed by Drew Goddard (The Cabin in the Woods), Bad Times at the El Royale is the kind of movie where the less you know going in, the better.  It’s an entertaining thriller where it’s clear that every character is hiding something and it’s up to the audiences to put the pieces together.  The performances are top-notch and there are some great one-on-one conversations.

Goddard has structured the film in a way that creates maximum intrigue.  It’s split into chapters where the focus is on a different person.  Just when you think you’ve got your head around a particular character, the film is quick to throw in an unexpected twist and change perspective.  A great example is the first major transition between the Jon Hamm and Cynthia Erivo narratives.  The fluid timeline will also keep viewers on their toes as the film slips back-and-forth between different periods of the day.

My only minor quibble was the arrival of Chris Hemsworth who, showing off his perfect abs at any opportunity, has a key part to play during the final act.  I could understand the motives of everyone in this ensemble but the Hemsworth character, without giving too much away, is too much of a goof.  The film wants to portray him as a tough, cunning individual but his poorly thought out plans don’t fit with that image.

The 140-minute running time might sound off-putting to some but Bad Times at the El Royale is fun stuff.