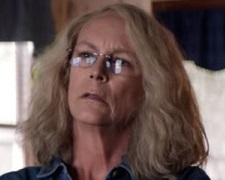 There’s no shortage of long-running film franchises but one which ranks highly (in terms of output) is Halloween.  The original was one of the highest-grossing films of 1978 and was followed by 9 sequels between 1981 and 2009.  There was a problem though.  Given there have been 7 directors and 16 credited writers, the series has struggled when it comes to continuity.  If you watched all the movies back-to-back, many plot developments wouldn’t make sense.

For that reason, the screenwriting team behind this new Halloween flick have pressed the “reset” button and gone back to the beginning.  It’s a little odd given they share the same title but Halloween (2018) is intended to be a direct sequel to Halloween (1978).  You can forget about the other movies and ignore the fact that Jamie Lee Curtis’ character has died twice previously!

To provide some quick background information for newcomers, the original Halloween was about a mute, mask-wearing serial killer named Michael Meyers who escaped from a sanatorium and brutally killed a bunch of people in a small American town on Halloween night.  This sequel picks things up 40 years later and we learn from the pre-credits sequence that Meyers has spent all of that time in a maximum security prison.  More than 50 psychiatrists have tried to diagnose Meyers but the general consensus is that he’s “pure evil”.

A plot twist is required to accelerate the drama and it arrives when a prison bus, escorting Meyers to a new facility on the night before Halloween (not exactly a great idea), unexplainably crashes into a ditch on the side of the road in the middle of the night.  Meyers escapes and the bloody mayhem is about to begin again.  As you’d expect given the genre, don’t get too attached to the characters as many will not survive.

Halloween (1978) was the first on-screen role for a then 19-year-old Jamie Lee Curtis and, after a lengthy and successful career, it’s nice to see her reprising the role of Laurie Strode.  Laurie was a naïve babysitter in 1978 but we now we see her as a very different person – a paranoid grandmother who lives in constant fear of Meyers’ return.  She’s created secret hiding spots in her well-fenced home and her front door has at least three locks.  Some see her crazy but her 40 years of preparation have value during the film’s big climax.

Characters are always going to make dumb decisions in horror movies to help prolong the story but those in Halloween lack credibility.  Audiences at my packed preview screening were laughing at the stupidity of some scenes and the incompetence of local police officers.  I won’t spoil too much but as an example, I don’t know why Laurie doesn’t reveal her strong suspicions about Meyers’ return when she breaks into the house of her daughter (Greer) to complain about her lax security.

Despite the not-so-perfect screenplay, Halloween still delivers as a cinematic experience.  It pays homage to its predecessor through its unsettling opening titles and the unforgettable film score created by John Carpenter.  It’s also not afraid to be gruesome and gory.  There are a few sequences that will catch audiences off guard as Meyers makes his move on unsuspecting prey.

Director David Gordon Green (Pineapple Express) is a newcomer to the genre but he’s clearly done his homework.  He makes great use of light and camera angles to heighten tension at just the right moments.  Considering the movie just had the second biggest box-office opening for an R-rated horror film in the United States (it made $76 million in 3 days), you’d like to hope that Green will be involved for more instalments to come.