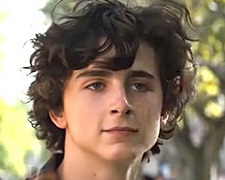 In 2008, two members from the same family published a book.  Journalist David Sheff wrote a non-fiction account of his efforts to connect with his drug-addicted son and how it affected their relationship.  It made such an impact that David was named one of Time Magazine’s “Top 100 Most Influential People” in 2009.  His son, Nic, also penned a memoir that looked at events from his perspective.  It provides insight into his mindset of a drug user and the difficulties of beating the addiction.

Both books are credited as being the source material for Beautiful Boy but it’s clear the focus of the movie is on the father (played by Steve Carell) as opposed to the son (played by Timothée Chalamet).  The film occasionally picks up Nic’s timeline but for the most part, we see the world through the eyes of the forlorn, helpless David who seeks answers to unanswerable questions.

The narrative is spread over a number of years but David first realises his son is a habitual drug user when 18 years of age.  Nic is a budding writer who has been offered a place in 6 different colleges but all of that unravels because of addiction to crystal meth (amongst other things).  Nic is somewhat reluctant but David convinces him to spend 28 days in a rehabilitation centre which offers a dubiously wide success rate of between 25% and 80%.

It’s hard not to feel sympathy for David as he struggles with how to respond.  There’s self-doubt as he wonders whether he could have raised his son differently to produce a better outcome.  There’s hope after he sees Nic make substantial progress and naively think his addiction has been cured.  There’s worry after Nic relapses and goes missing for lengthy periods of time.  There’s even an element of acceptance as David comes to grips with the reality that perhaps he will never be able to help.

It’s an important subject matter but the fast-paced nature of the screenplay doesn’t allow the emotional impact to sink through.  There are many flashbacks as the film slips back-and-forth between Nic as an adult and Nic as a child.  It’s designed to show the contrast in his actions and personality but the technique is used so many times that it becomes a distraction.  There were even a couple of moments where I was unsure of the timeline.

This could have been a more powerful film if the emphasis was placed on just a handful of days in David’s and Nic’s respective journeys.  The decision to include events over several years gives it a fragmented feel.  We skip quickly between events and we don’t get an appreciation of what happened in the middle to fully understand each character.  I wasn’t sure about a few of the song choices either and the way they fit with the material.

All of that said, Beautiful Boy deserves praise for the performances of its two leading men.  Steve Carell began his career in comedy but his performances in films such as Foxcatcher, The Big Short and Last Flag Flying highlight his ability to easily change genres.  There are lengthy dialogue-free sequences where Carell’s body language is left to do the talking.  Timothée Chalamet rocketed to stardom with his Oscar-nominated performance in Call Me by Your Name and he proves that he’s anything but a “one hit wonder” as the confused, fidgety Nic.