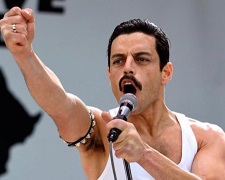 I’m going sound terribly naïve but as someone who isn’t a huge music devotee, the first takeaway from Bohemian Rhapsody is the quantity and quality of songs written by Queen through the 1970s and 80s.  It would be hard to name them all in a single breath but the list would include Bohemian Rhapsody, Somebody to Love, You’re My Best Friend, We Are the Champions, We Will Rock You, Don’t Stop Me Now, Crazy Little Thing Called Love, Another One Bites the Dust, Under Pressure, I Want to Break Free and I Want It All.  Most artists would be happy to have just one of those songs on their resume let alone the whole collection.

A fair chunk of time in this biopic is dedicated to celebrating the songs of Queen and the artistry of the four band members – lead vocalist Freddie Mercury (Malek), drummer Roger Taylor (Hardy), and guitarists Brian May (Lee) and John Deacon (Mazzello).  It’s a little over-romanticised in places but we go behind the scenes and learn how some of the songs came to be written and first performed.

As an example, there’s a great backstory behind the high pitched notes in “Bohemian Rhapsody” and the many attempts it took to perfect – “If I go any higher, only dogs will hear me!”.  There’s also a humorous scene with a music executive who has serious concerns about the song’s length and radio playability (although it’s noted this character never actually existed and is more an amalgamation of Queen-doubters).

The concert re-enactments are also energizing to watch – particularly during the film’s huge musical climax which takes place at the Live Aid concert at Wembley Stadium in July 1985.  It’s hard not to feel a tingle down the back of your spine as you watch Freddie Mercury sing the very best of Queen’s collection in front of 72,000 screaming, adoring fans who are singing straight back to him.  The visual effects teams deserve praise for making it look so real.

The other side of the film is a deeper, darker exploration of Freddie Mercury as a person.  It’s a life-changing role for actor Rami Malek (Mr. Robot) and it’s easy to see why he’s being touted as a possible awards season contender.  It’s not solely his voice during the singing scenes (Malek has said they used an “amalgamation of voices) but he mirrors Freddie’s look and mannerisms.  Above all else though, he has created an interesting character.

I was particularly intrigued by the contrast in Freddie’s professional and personal lives.  As a singer/songwriter, he was supremely confident in his talent and ability.  He wasn’t afraid to take risks, buck convention and be “more outrageous” than anyone else.  His personal life was very different.  He struggled to come to grips with his sexuality, felt insecure when left alone, and yearned to be loved as part of a “family”.

The film does enough to provide us with the “essence” of Freddie but is weighed down by the breadth of material.  It feels like it’s only scratching the surface when it looks at his relationship with his parents and his long-time boyfriend, Paul, who becomes an overly simplistic villain.  Further, several events are rushed such as an argument between Freddie and his manager (Gillen) over his option to pursue a solo career.

Bohemian Rhapsody endured a troubled production in that director Bryan Singer (X-Men) was fired and replaced by Dexter Fletcher (Sunshine on Leith) part way through the shoot.  Singer still gets the official credit as director given he was there for about two-thirds of principal photography.  Despite all the problems and rumoured on-set arguments, the good news is that Bohemian Rhapsody still provides comedy, tragedy and a killer soundtrack.

You can see my chat with star Rami Malek by clicking here.