Review: The Girl in the Spider's Web 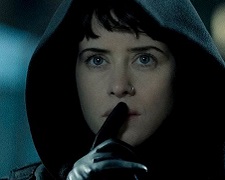 Claire Foy has already made her mark in the world of television but winning a Golden Globe and Emmy Award for her performance as a young Queen Elizabeth in the Netflix series The Crown.  She’s now using her newfound stardom (and her immense talent) to break into Hollywood.  So far this year, she’s given an intense performance as a woman incarcerated in a psychiatric ward in Steven Soderbergh’s Unsane.  That was followed by her portrayal as Neil Armstrong’s strong willed yet worried wife in Damien Chazelle’s First Man (which looks set to land her an Oscar nomination).

Her latest challenge is to step into the shoes of a character already made famous by other actors.    Computer hacker extraordinaire Lisbeth Salander was portrayed by Noomi Rapace in the Swedish trilogy released back in 2009 and by Rooney Mara in the 2011 remake from director David Fincher.  Author Stieg Larsson never had the chance to see his creation come to life on screen given he passed away a year before his famed novel, The Girl with the Dragon Tattoo, was first published back in 2005.

The catch with The Girl in the Spider’s Web is that it’s the first movie in the franchise to not be based on one of Larsson’s three novels.  Rather, it’s the creation of David Lagercrantz, a Swedish author engaged by the publishing company to write two more books in the Millennium series.  We can never be sure if Larsson would have approved of the work but at least these new novels will satisfy those looking to know more about the adventures of Lisbeth Salander and her investigative journalist friend, Mikael Blomkvist.

The good news for Claire Foy fans is that she’s the best thing in this.  She portrays Salander as depicted in the novels – a person with a brilliant mind but who struggles when it comes to social skills.  When you see her goth look and rugged accent, it’s hard to believe it’s the same actor who played the prim and proper Queen Elizabeth in The Crown.  Salander has already been an intriguing character.  As we see in the opening scene, she relishes her reputation in the media as a Batman-style “vigilante” and has no intention of going into permanent hiding.

The problem with this film is its farcical, fragmented script.  Everything feels like it comes far too easily to Salander.  She can hack networks a heartbeat, she can evade capture when surrounded by bad guys, and she has an uncanny sixth sense that alerts her to imminent danger (such as a chaotic scene where she helps a reckless National Security Agency official escape confinement).

The other players in this ensemble have little to offer.  Frans Balder (Merchant) is a careless computer programmer who has engaged Salander’s services to help protect a valuable tool that could destroy the world.  Mikael Blomkvist had a strong presence in the earlier movies but he’s a helpless, pointless observer this time around.  There’s also a subplot involving Salander’s family history that comes as too much of a surprise given her acute awareness of all things in the world.

The cinematography from Pedro Luque (Don’t Breathe) deserves a mention but it’s not enough to compensate for the weak premise and lacklustre performances (Foy excluded).  If you want to see how good this series can be, hunt down the original The Girl with the Dragon Tattoo from 2009.