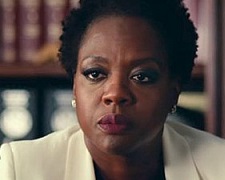 Crime thrillers often culminate with a fast-paced action finale where the cops apprehend and/or kill the bad guys.  That’s usually followed by a short epilogue and then it’s fade to black.  The curious twist in Widows is that such events take place during the opening sequence.  Experienced criminal Harry Rawlings (Neeson) and his partners are brutally killed by Chicago police officers after a botched robbery.  These characters, who you think may be the crux of the movie, don’t even last 5 minutes!

Based on the 1983 novel by English author Lynda Le Plante, Widows then asks the question we don’t often see in cinema – what happens to the families of the villains once they’ve met a grizzly demise?  In this instance, Veronica Rawlings (Davis) finds herself unwillingly thrust into her husband’s profession.  A powerful crime boss rocks up on her door step demanding the return of $2 million (that Harry had stolen) and if not paid in a month, there would be serious, likely to be fatal, consequences.

Veronica doesn’t have much experience when it comes to organised crime but she does have a gift from her late husband – a notebook with the plans for a $5 million heist that was never executed.  To link back to the film’s title, she reaches out the two widows of her husband’s fellow gang members to gauge interest.  Linda (Rodriguez) and Alice (Deibicki) are reluctant but given their precarious financial position, they decide to get involved – “she’s got money so we may as well see where this goes”.

There are other players in this large ensemble with a significant part to play.  Jack Mulligan (Farrell) is a young, corrupt politician who is trying to follow in the footsteps of his ailing father (Duvall) and win an upcoming council election.  His challenger is Jamal Manning (Henry), a middle-aged black man with an equally dubious past and a campaign manager (Kaluuya) who prefers violence to diplomacy.  It’s not much of a role but it’s nice to see Australian Jacki Weaver making a cameo as a sinister mother.

Released earlier in the year, Ocean’s 8 was a movie designed to show that female criminals could be just as entertaining to watch as their male counterparts.  It was underwhelming but that’s largely because of the weak script where everything came far too easily to the likeable protagonists.  Widows is a superior film because it feels more gritty and realistic.  These women aren’t perfect and they make mistakes.  This isn’t intended to be the start of a long-term career in crime.  They’re desperate and they’re prepared to risk a jail sentence in pursuit of this “one and done” job.

The film also wins points for great dialogue and unpredictable nature.  Quick splashes of violence and a few cool twists will catch audiences off-guard.  It’s hard to pick a standout amongst the major players given they all have a strong screen presence but the arrival of Cynthia Erivo as an energetic babysitter looking to make a little extra cash gives the film a value-adding spark.

Directed by Steve McQueen (12 Years a Slave) and co-written by Gillian Flynn (Gone Girl), Widows is a winning heist flick.