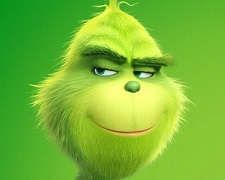 It was 18 years ago when director Ron Howard released a live-action version of the acclaimed Dr. Seuss book, How the Grinch Stole Christmas.  Jim Carrey stepped into the shoes of the famed leading character and the film went on to make $345 million USD at the international box-office and win an Oscar for best makeup.

It seems that enough time has passed for Universal Pictures (who still control the rights) to put a remake into production and introduce the character to a fresh batch of children.  This time around, they’ve gone with an animated version with the reigns handed over to Illumination – the studio behind the The Lorax (the last feature film to be based on a Dr. Seuss work) and the Despicable Me franchise.  They’ve even thrown in a quick Minions short which screens before the feature in cinema.

This is largely faithful adaptation as we follow two characters on a collision course.  The first is The Grinch (Cumberbatch) who has a passionate hatred for Christmas.  Forced to leave his isolated cave and heading into the town of Whoville for some grocery shopping on December 20, he’s quick to avoid everyone and everything.  He destroys a kid’s snowman, he runs from carollers, and he inconveniences a customer at the store.

On the other end of the spectrum, we have a young girl named Cindy Lou (Seely) who has embraced Christmas.   She’s not a big heart which is evident in her letter to Santa.  Rather than ask for a bunch of tangible presents, she asks that Santa help her time poor mother (Jones) who is juggling work whilst also raising three children.

Everything comes to a head when our two protagonists put their respective plans into action.  The Grinch is sick of everyone else being happy and so he concocts a scheme to “steal” Christmas.  He’ll sneak into everyone’s homes on Christmas Eve and take whatever festive material he can find (including presents).  As for Cindy Lou, she’s set up a trap in her living room so she can capture Santa and ask him face-to-face about her Christmas wish list.

This is a cute film.  There’s a great attention to detail as we watch the residents of Whoville go “all out” with their Christmas celebrations.  I’d hate to see their electricity bill given the number of lights that adorn the streets and houses.  They’ve also got a Christmas tree that in terms of size, would rival the giant cow that is doing the rounds on Australian social media.

Benedict Cumberbatch is almost unrecognisable as the voice of The Grinch and it’s nice to see 93-year-old Angela Lansbury making a quick fire cameo.  Of the cast, Pharrell Williams makes the biggest impression as the film’s narrator.  He helps preserve the spirit of Dr. Seuss’s 1957 book by speaking in rhyme when called upon during key scenes.  I also enjoyed the work of the animation team who have created distinctive Whoville characters with large heads and tiny legs.

With an apt release date, The Grinch should help get kids in the Christmas spirit (not that some of them need it) in the lead up to the big day.