Review: Spider-Man: Into the Spider-Verse 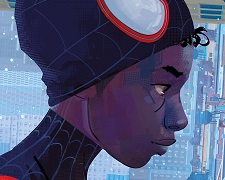 He’s one of the most popular superheroes to be created by Marvel and over the past 16 years, we’ve had 6 films dedicated to the adventures of Spider-Man with 3 different actors stepping into his skin-tight suit – Tobey Maguire, Andrew Garfield and Tom Holland.  If you think that’s heavy, wait until you see what’s in store over the next few years.

For starters, we haven’t seen the last of Tom Holland who rebooted the franchise in 2017 with Spider-Man: Homecoming.  We’ll see him again in 2019 with Avengers: Endgame and Spider-Man: Far From Home and there’s likely to be more given Holland is contracted to make six Marvel Universe movies in total.  It’s also possible that we’ll see the character (with a different actor) appear in Sony’s new superhero universe which kicked off profitably back in October with the release of Venom.

If that’s not enough, we now have a new animated flick that features not just one but rather, several iterations of Spider-Man!  The villainous Kingpin (Schreiber) has opened up a portal into other dimensions which feature alternate versions of Spider-Man.  They all end up in the same location and it’s a recipe for laughs and creativity.  Just went you think you’ve seen it all within the genre, along comes a movie with six different Spider “men” trying to save the world.  I don’t want to give too much away but the animation team have done a sensational job in giving each character a distinct look and feel.

Someone needs to take the lead and that responsibility falls upon Miles Morales (Moore), a New York City based teenager who takes on superhero qualities after being bitten by a spider (his reaction wins big laughs).  The character will be new to some cinemagoers but he’s been appearing in comic books since 2011 and has featured in the Ultimate Spider-Man animated television series.  Miles is also a step in the right direction in terms of diverse role models given his father his African American and is mother is Puerto Rican.

Spider-Man: Into the Spider-Verse is one of the funniest superhero movies that we’ve seen over the past decades.  It feels like it’s tapping into the success of Deadpool in that it’s very self-aware and broadly mocks the genre.  It makes references to past Spider-Man productions and even the old TV theme from the 1960s gets a run.  Another cute touch are the words that flash up on screen as characters get hit (again, another fun homage).  The fact that it’s an animated movie, which we don’t often see within this genre, has allowed the writers and directors to push boundaries in terms of visuals and originality.

There’s an added poignancy to the film in that it marks the first Marvel themed flick to be released following the death of Stan Lee who passed away last month at the ripe old age of 95.  This is recognised during the closing credits but more importantly, there’s another great Stan Lee cameo part way through the movie that audiences will enjoy.  If you’re paying really close attention, you’ll spot Lee in the background of several shots – a fitting Easter egg provided by the three-man directing team.

Likely to earn an Oscar nomination for best animated feature (it already has a Golden Globe nod), Spider-Man: Into the Spider-Verse takes chances and is rewarded in a big way.