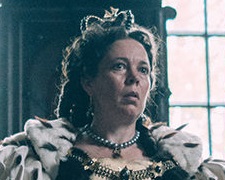 If you’ve seen a movie from Greek director Yorgos Lanthimos, you’re likely to have remembered it.  Dogtooth was the tale of two parents who had raised their children in a locked compound and kept them “safe” from the outside world.  The Lobster was set in a dystopian world where adults who don’t fall in love are turned into the animal of their choosing.  The Killing of a Sacred Deer was about a surgeon stalked by a creepy teenager.  My simple plot descriptions mask the dark, complex undertones that will shock and surprise first-time viewers.

The Favourite marks a departure for Lanthimos in that it’s the first time he hasn’t directed his own screenplay.  That credit belongs to two writers who never actually worked together.  British historian Deborah Davis came up with a first draft back in 1998 after attending night school classes to help learn the art of screenwriting.  When Lanthimos became attacked to the project in 2010, he gave the script to Australian Tony McNamara (The Rage in Placid Lake) and asked him to transform it into a “different kind of period movie”.  Based on the offbeat tone, sexual references, and number of “c-bombs”, it’s clear that McNamara has delivered on that vision.

There’s a lot to admire about The Favourite but the most riveting element is the interplay between the three leading characters.  Set in 1708, Queen Anne (Coleman) sits on the British throne and lays down the laws of the land.  She’s such a multifaceted person.  Anne is an incompetent leader with a short attention span, deteriorating health, and a limited knowledge of world issues.  She’s not naïve though.  She relishes her control and takes great delight in wielding it.  On one hand, she can humorously hurl insults without ramification but on the other hand, she can show a softer side and use her authority to shape her country for the better.

For many years, Anne has been guided by the words and wisdom of Sarah Churchill (Weisz), the Duchess of Marlborough.  She’s also a fascinating character in that you’re never quite sure how much she’s driven by love and how much she’s driven by power.  There’s a key subplot involving a respected politician (Hoult) who seeks an appointment with the Queen to protest proposed tax hikes.  Sarah prevents the meeting from taking place but is her rationale to protect the insecure, vulnerable Queen or because she is more interested in pushing her own political agenda?

Sarah’s comfortable spot inside the Queen’s household is upended by the arrival of Abigail Hill (Stone), her young, poor cousin who seeks employment.  The book smart Abigail starts out as a lowly scullery maid but it’s not long before she’s using a few tricks and a few fingers to gain the Queen’s attention and trust.  What follows is a dangerous game with both Sarah and Abigail tossing their morals aside (assuming they had them in the first place) in pursuit of the power and status that comes with being Queen Anne’s “favourite”.

Based on actual events, The Favourite is a rich, dark comedy filled with great one-liners and unexpected twists.  From the Queen’s bipolar nature to Sarah’s tell-it-like-it-is persona (“you look like a badger”), there’s so much room for humour.  The eyebrow-raising sex scenes only add to the laughs as exemplified by a bedroom scene involving Abigail and her new husband (Alwyn).  It’s very much the opposite of a Jane Austen period piece.

Lanthimos adds further spice to the material by using a mix of classical and modern-day composers to create an unsettling, violin-laden music score.  Cinematographer Robbie Ryan (I, Daniel Blake) also impresses with the use of unconventional camera movements and wide lenses.  All of that said, it’s the performances that are likely to resonate most strongly with audiences.  Olivia Coleman, Rachel Weisz and Emma Stone are at their very best and all three are on track to earn Academy Award nominations next month.  Deservedly so.

You can read by interview with Australian screenwriter Tony McNamara by clicking here.