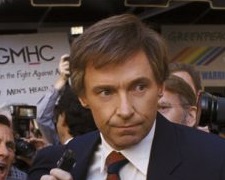 On 13 April 1987, former United States Senator Gary Hart announced his candidacy for President.  He’d spent several years making a name for himself and now the time was right to seek the nomination of the Democratic Party and take control of the White House back from the Republicans.  He was well-liked, he was ahead in the polls and he faced no serious competition.  One month later… his campaign was over.

There are two predominant narratives in The Front Runner.  The first is a character study of 50-year-old Gary Hart (Jackman) which provides insight into his history, his family and his ideals.  He had a slightly unorthodox style, at least by today’s standards, in that he was more focused on developing policies than endless photoshoots and public appearances.  He also had a strong relationship with journalists.  They would continually share lunch as Hart openly and passionate spoke about his long-term vision for the United States (and also the benefit of his perfect hair in the polls!)

The second, more interesting narrative involves the journalists themselves.  Acting on an anonymous tip, a team from The Miami Herald put Hart’s Washington D.C. townhouse under surveillance to confirm if he was having an extramarital affair with Donna Rice, a model-actress living in Miami.  After seeing Rice enter the residence, the Herald decided they had enough information to publish a front-page exposé with the damning headline “Miami woman is linked to Hart”.

What followed over the coming days was a media storm from which Hart would never recover.  He denied having a relationship with Rice but it was the manner of Hart’s denial that added more fuel to the fire.  He felt that his personal life should be “off limits” to the press and it should have no bearing on his ability to serve as President.  The media disagreed.  More questions followed and within a matter of days, he ended his campaign.

Brought to the screen by Oscar nominated director Jason Reitman (Juno, Up in the Air), The Front Runner doesn’t try to answer questions about the relationship between Hart and Rice.  Were they just friends or were they something more?  We’ll never truly know.  The purpose of the film is to get you thinking about the line between what is public and what is private when it comes to politicians.  Does the public dictate where the line is or are journalists making the decision for us?  Also, are we consistent when comparing one politician to another?

This a polished production from Reitman.  It features a snazzy film score from Rob Simonsen and distinctive cinematography from Eric Steelberg who uses long, continuous shots to give it a documentary-like feel.  We’ve come accustomed to seeing Hugh Jackman in musicals and action films in recent years and so it’s nice to see him sink his teeth into a dramatic role about a real-life person.

In a similar vein to Steven Spielberg’s The Post, The Front Runner delves into the important role of journalism in a world filled with corruption and “fake news”.  You may not like Gary Hart and you may not like the journalists but it’s a great conversation starter.