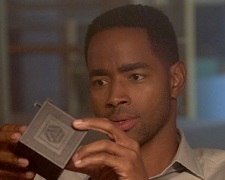 It was always a matter of when rather than if a major Hollywood studio would make a horror flick set in an escape room.  The fad began in Japan roughly 10 years ago and there are now estimated to be close to 10,000 rooms around the world (including about 200 here in Australia).  As a fan of puzzles, I’ll admit that I’ve given them a go several times and have never had a bad experience.

Turning to the movie… we need a way to bring this random group of characters together and so screenwriters Bragi F. Schut and Maria Melnik use money as the hook.  Six strangers have been given a box that invites them to participate in one of the best escape rooms going around.  They’re told that no one has been able to complete it within the required time frame but if they do, they will each receive $10,000.  It’s an offer that too hard to refuse.

They are escorted into a waiting room and they get to know each other with a few quick, probing questions.  Danny (Dodani) is the brains having completed close to 100 rooms, Mike (Labine) is the old guy who doesn’t know the game works, Ben (Miler) is the joker who badly needs the money, Jay (Ellis) is the smartly dressed know-it-all who asserts his authority, Amanda (Woll) is the strong, tough woman who can take it up to the guys, and Zoey (Russell) is the shy introvert who is scared of new things.

It takes about 15 minutes to set up the premise but once that’s out of the way, it’s time for the fun to begin.  I don’t want to give too much away (similar to a real-life escape room) but suffice to say these characters will have to solve difficult puzzles and navigate their way through a series of intricate rooms.  This is no standard game and instead of trying to win $10,000, they’ll soon be fighting to stay alive.

You can’t take a movie like this too seriously.  There are a lot of plot holes and a lot of convenient moments that fall into place to help prolong the narrative.  As an example, did none of them tell a friend or family member exactly where they were going?  How did those behind the game expect to cover up the death of certain people so easily?  I guess it’s calling upon the old movie cliché of an incompetent police force.

That’s not to say you can’t have fun watching this.  I was surprised by how engaged I became in the storyline and like the characters themselves, you’ll be wondering what they need to do to escape each room.  The film moves at a quick pace which is both a positive and a negative.  It allows for plenty of scenarios to be put to the audience but the rush to solve them becomes too chaotic in places.

Director Adam Robitel (Insidious: The Last Key) makes a few stylistic choices that feel unnecessary.  This includes the introduction (which gives away part of the finale) and a bunch of quick flashbacks that provide a visual representation of each character’s chequered past.  Still, he deserves big praise for pulling together such an elaborate project, which includes many cool sets, on a budget of just $9 million.  The fact it was shot in South Africa with a largely no-name cast helped keep costs down.

There are similarities with the successful Saw franchise and given that has been milked for 8 movies in total, I’ve a hunch we’ll be seeing more from the Escape Room franchise in the coming years.