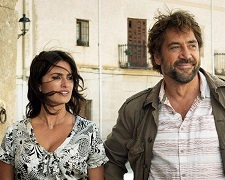 Weddings are a great excuse to bring people together.  During the opening scenes of Everybody Knows, a group of jubilant family and friends have descended on a home in Madrid to celebrate the union of Ana and Joan.  We follow the story from a number of perspectives but perhaps the most prominent character is Laura (Cruz), the older sister of the bride.  It’s the first time she’s seen her sister and father in years given she now lives in Buenos Aires with her husband (Darín) and two children.

A crime is committed at the end of the opening act which dramatically changes the film’s tone.  What appears to be a celebratory family get-together is transformed into something much more sinister.  I’m reluctant to give too much away given the trailers and online promotional blurbs are light on detail.  The intent to preserve the surprises as much as possible for the audience.

In the aftermath of the crime, there’s a lot of soul searching and finger pointing.  It’s as if everyone reacts in a different way.  Some remain calm and cool-headed while others struggle to keep their emotions to check.  The best scenes involve a retired police detective (played by José Ángel Egido) who offers sage advice to those affected.

Everybody Knows is the latest from Iranian director Asghar Farhadi.  Those who have seen A Separation and The Salesman (which both won the Oscar for best foreign language film) will appreciate his abilities to create intriguing stories and then fill them with complex characters.  That’s again the case here but Farhadi takes on the additional challenge of using a non-native language.  Farhadi has a very limited Spanish vocabulary and he required the help of two gifted translators to communicate his detailed instructions.

The cast is headlined by two of Spain’s most renowned actors, Oscar winners Javier Bardem (No Country for Old Men) and Penélope Cruz (Vicky Cristina Barcelona).  Their on-screen relationships began in 1992 when they starred alongside each other in the award winning Jamón Jamón.  Their off-screen relationship began in 2007 while filming Vicky Cristina Barcelona (they’re now married with two children).  They clearly have no issue mixing business with pleasure given Everybody Knows is the 9th time they’ve appeared together in the same movie.

The finale doesn’t offer the knockout punch that you might be expecting but Everybody Knows is still an absorbing drama-thriller that delves into family relationships and the secrets we keep from each other.