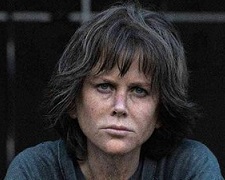 She’s not totally unrecognisable but it’s clear from the opening scene that Destroyer features a stunning physical transformation from Oscar winner Nicole Kidman (The Hours).  She’s got scruffy hair, a misshapen nose, cracked lips, bags under her eyes and stained teeth.  Make-up designer Bill Corso was inspired by the look of aging, weathered rock stars who had done nothing to take care of themselves.

It’s certainly not the stereotypical look that you’d expect for a cop.  Kidman is playing Erin Bell, a member of the Los Angeles Police Department who has had a tough decade battling an assortment of addictions and other self-inflicted problems.  An early sequence at a crime scene highlights that she’s become the “office joke”.  Her fellow officers ask if she’s been drinking (an easy assumption to make given her dishevelled look) and then they firmly encourage her to stay out of their way.

Destroyer offers up a number of subplots that revolve around two main questions.  Firstly, what happened in Erin’s past that caused her sad transformation?  Writers Phil Hay and Matt Manfredi provide answers in a slow, methodical manner through a series of flashbacks.  Secondly, what is her connection to a bank robbery in Palm Springs?  It took place 15 years ago but the recently delivery of a package to Erin’s office confirms that the final chapter of the robbery tale is yet to play out.

Directed by Karyn Kusama (Girlfight, The Invitation), Destroyer is a little uneven when balancing up the two timeframes but it’s still an intriguing piece of cinema thanks to the strong performance of Kidman (who earned up a Golden Globe nomination for the role).  She’s a great character – a police detective who ignores all advice (even when it’s good advice) and does things in her own unique way.  This is emphasised in a humorous scene where she interacts with a cancer-suffering criminal (McNairy) who has valuable information to offer.

Pulling in a paltry $1.5 million at the US box-office, it’s a shame that Kusama’s film has struggled to find an audience.  A few subplots are not explored as deeply as they could have been (such as Erin’s relationship with her 16-year-old daughter) but this still more interesting than a lot of the safe, formulaic blockbusters coming out of Hollywood.  Hopefully Australian audiences will give it a chance given the star power of our own Nicole Kidman.