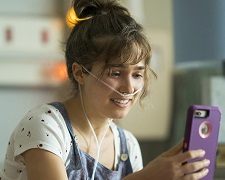 Cystic fibrosis is a genetic disorder that affects one in every 2,500 babies born here in Australia.  Instead of having thin, slippery secretions (such as mucus, sweat and tears), cystic fibrosis causes them to become thick and sticky.  This creates issues with blocked passageways in the human body and with no known cure, the average life expectancy is less than 50 years.

It’s a condition seldom depicted on screen and so Five Feet Apart provides insight through its leading character – a clean-freak teenager named Stella (Richardson).  She comes across as a normal, smarty, chatty person but there’s one huge barrier.  While her friends go outside, party hard and travel the world, Stella is confined to a sterile hospital ward where she must follow a strict regime of medication and treatment.  If she we were to be afflicted by something as simple as the flu, the effects could be life-threatening.

It’s why the “six feet apart” rule has become a critical piece of advice for those with cystic fibrosis.  When people talk, laugh, sneeze, or cough, tiny droplets are made which can travel up to 6 feet through the air before falling to the ground.  You therefore need to remain a safe distance apart to help avoid the spread of germs in these droplets.  Oh, and if you’re wondering why the film is called Five Feet Apart instead of Six Feet Apart, it’s not because it wants to give out dodgy medical advice.  Rather, it’s referencing the fact that Stella is prepared to push a few boundaries.

If there’s one key takeaway from this story, it’s the way in which the internet and social media can be used as a positive tool for those with cystic fibrosis or similarly troubling conditions.  Stella has created a popular YouTube channel where she posts regular video blogs and interacts with people across the world.  It gives her a sense of value and purpose.  She also uses her phone to FaceTime friends and family and while it’s not the same as being with them in person, it’s a worthy substitute to help shake off the effects of boredom and loneliness.

While keeping tabs on events outside, the reality is that Stella’s world revolves around those inside the hospital.  She enjoys the banter with a spirited, take-no-nonsense nurse (Gregory) who watches over her like a loving mother.  She’s quick to open up and dispense advice when chatting to a gay teenager (Arias) who is battling the same disorder and resides in a neighbouring room.  There’s also an intriguing piece involving Stella, her mother and her older sister.

All of these subplots are interesting but the problem with Five Feet Apart is that it chooses to focus on the weakest narrative – a dull, sappy romance that is heavy on melodrama and light on realism.  Stella falls in love with Will (Sprouse), a fellow cystic fibrosis sufferer who loves to draw and do things his own way.

First-time writers Mikki Daughtry and Tobias Iaconis continually drum home the same point – these two really love each other but they’re sad/frustrated by the fact they can’t hold hands, hug or kiss like a regular couple.  It reaches the point where they get closer and closer (from a physical point of view) and they’re prepared to risk their lives in pursuit of love.  I just didn’t buy into their actions and the clumsy, corny finale added to my confusion.

The casting of two relatively semi-well-known actors in their mid-20s, Haley Lu Richardson (The Edge of Seventeen, Split) and Cole Sprouse (The Suite Life of Zack & Cody, Riverdale), helps pitch the film to the younger demographic.  I took a fellow teenager to the preview screening and his eyes were both red and moist as the credits started to roll.  Perhaps I wasn’t part of the target audience.  Perhaps I’m just too cynical and cold-hearted.