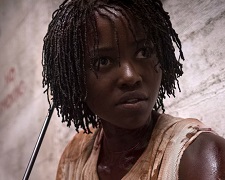 Few filmmakers in the past decade have made as big an introduction as 40-year-old Jordan Peele.  Get Out was a low budget horror film (shot for just $4.5 million USD) that wasn’t even advertised when it premiered at the Sundance Film Festival in January 2017 (as it was part of a secret midnight screening).  Released in cinemas a month later, the film made an astounding $255 million USD at the global box-office and Peele became the first African American to be nominated at the Academy Awards for directing, writing and producing in the same year.  He took home an Oscar for best original screenplay.

Expectations have been high for Peele’s follow-up and that in itself comes with challenges.  Having already made one of the great horror flicks of all time, what could he possibly craft that will be just as satisfying to audiences?  He’s decided to stick with the same genre.  Inspired by an episode of The Twilight Zone that he’d seen as a kid, he’s come up with another fear-inducing journey that, based on the early box-office from the United States, will make a lot of money.

It’s easy to scare people with blood, gore and violence and while there’s an element of that in Us, it’s clear that Peele wants to use other techniques to generate an emotional response.  The opening few scenes include information about tunnels, a Hands Across America commercial from 1986, a biblical reference, a young girl lost in a theme park, and a lengthy opening title sequence involving a caged rabbit.  These strange events, coupled with an unsettling music score from Michael Abels, will leave you feeling quizzical and uncomfortable.

Us is a film littered with twists and turns and so in providing a plot overview, I’ll stick to what’s already been revealed in the film’s trailers and other promotional material.  It’s the story of a 4-person family on a summer vacation in California who find themselves terrified by… themselves.  A clone family arrive on their doorstep who are dressed in red and are carrying large, gold scissors.  Where did they come from?  Who created them?  What do they want?

Peele’s latest will hold your attention throughout and I loved the way in which he’s infused comedy within the thrills.  He’s also provided a platform that allows Lupita Nyong’o to showcase her incredible talent.  This is Nyong’o’s first leading role (hard to believe given she won an Oscar five years ago for 12 Years a Slave) and she dominates the film through her performance as the fierce, passionate Adelaide and as her creepy, emotionally stilted clone.

There’s a powerful climax which, without giving anything away, will take some time to process and digest.  Just as he did with Get Out, Jordan Peele has something important to say here.  That said, there are a large number of deliberately unanswered questions that frustrate as much as they create intrigue.  It feels like the narrative is over-manufactured in places so as to fit with a particular metaphor.

Us is a hot mess – a lot of great ideas but it doesn’t flow as smoothly as it should.