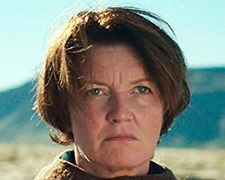 It’s one of the tiniest countries in the world with a population of less than 400,000 people but it hasn’t stopped Iceland from establishing a cinematic footprint.  A plethora of Hollywood blockbusters have shot key scenes against the backdrop of its pristine landscape including Die Another Day, Batman Begins, Prometheus, Thor: The Dark World, Interstellar and Fast & Furious 8.  Iceland also has a small but passionate domestic film industry which produces roughly four movies each year.

Woman at War is the first Icelandic film in three years to achieve a cinema release in Australia (following Rams in 2016) and it’s easy to see why it was chosen given its quality and quirkiness.  It was one of just 7 features selected as part of International Critics’ Week at the 2018 Cannes Film Festival and its star performer, Halldóra Geirharðsdóttir, was nominated for best actress at the European Film Awards (losing to Cold War’s Joanna Kulig).

Geirharðsdóttir plays Halla – a strong-willed environmental activist who, rightly or wrongly, has taken it upon herself to create change within her community.  Rio Tinto run an aluminium plant in the Icelandic highlands and Halla sabotages a potential deal with China by continually disrupting the plant’s power supply.  Her creativity is illustrated in the opening sequence where she hikes into the middle of nowhere and short circuits the electricity grid using a bow and arrow.

Halla’s actions have not gone unnoticed and the government is increasingly worried about the economic fallout should the China deal not go ahead.  The authorities are using drones, helicopters, sniffer dogs and police officers in an effort to locate those responsible to bring them to justice.  Yes, her actions are illegal but it’s hard not to be entertained as she uses an array of tricks to avoid detection.  She’d give Ethan Hunt and Jason Bourne a run for their money.

There’s a deeper, more emotive layer to the story when the unmarried, independent Halla receives a startling phone call about an adoption application she’d made several years ago.  A 4-year-old Ukranian girl lost both of her parents in the country’s war with Russia and Halla has been asked to adopt the scarred child and provide her with a fresh start.  She desperately wants to accept the offer but realises that it will conflict with her activism.  What would happen to the child if she is caught by the authorities and imprisoned?

Woman at War beautifully illustrates the complexity of the world and the people who live in it.  Halldóra Geirharðsdóttir is terrific in the lead role and as an added bonus, she also gets to play her twin sister – a character who serves as a valuable sounding board (kudos to the special effects team).  There’s a great group of supporting players headlined by an elderly sheep farmer and a confused Spanish backpacker.

The most fascinating element to the film is the way director Benedikt Erlingsson has infused the music score within the narrative.  The soundtrack wasn’t put together in the editing room after the shoot was complete.  Erlingsson’s film breaks through the “fourth wall” and has a band and/or singers in the background during key scenes (whether it be set in a small living room or an expansive field).  I had to smile during one poignant moment where Halla looks over her shoulder after the band stops playing.

If you like a rich, offbeat, intricate drama with splashes of comedy, Woman at War is not to be missed.