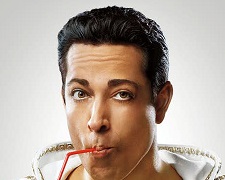 I was reading earlier in the week that the current Japanese era, known as Heisei, will come to a close after 30 years when Emperor Akihito abdicates and hands the reigns over to his eldest son.  If we adopted a similar naming system within the movie industry, the last decade would have named in honour of superheros and, based on the number of films being churned out, it’s likely to last for at least another decade.

With Captain Marvel still in theatres and Avengers: Endgame set to be released in three weeks, DC Films are taking advantage of a narrow window and releasing Shazam!  It’s the 7th film in their extended universe which began with Man of Steel in 2013 and has included films such as Wonder Woman and Justice League.  In terms of box-office and brand awareness, they’re still trailing Marvel Studios by a significant margin but they have made up ground in recent years (2018’s Aquaman grossed more than $1 billion worldwide).

There’s a lot going on in Shazam! and that’s part of the reason it’s stretched out to a lengthy 132 minutes.  Billy (Angel) is a teenager who has had endured a tough upbringing.  He never knew his father, his mother left when he was a toddler, and he’s bounced around from foster home to foster home.  His latest placement is in group foster home where child services officers hope he’ll make friends and leave behind his troubled ways.

It’s at this point where Billy’s life goes from sad to strange.  He is visited by an old, tired wizard (Hounsou) who has spent his life guarding the “Rock of Eternity” and keeping a series of seven monsters, who each represent a deadly sin, from wreaking havoc on Earth.  The wizard is looking for a new subject to help protect the rock and for whatever reason, Billy becomes the chosen candidate.  He touches the wizard’s staff (yep, that’s a joke they use) and inherits an array of superpowers.

Billy’s exploration of his powers is the best part of the movie.  He takes on the form of an adult (Levi) but he still acts like a goofy, immature teenager.  Billy is guided by his foster brother, Freddy (Grazer), who has spent years reading about superheros and is quick to offer advice.  It’s hard not to laugh as they test Billy’s superhuman abilities while also visiting a local real estate agent to rent a lair.  The comedic chemistry between stars Zachary Levi, Asher Angel and Jack Dylan Grazer is hard to fault.

The film struggles to create an interesting, meaningful villain.  Dr. Thaddeus Sivana (Strong) has spent his entire life in search of Rock of Eternity and now that he has control of it… well, I don’t know what he wants.  Anyway, it falls upon Billy to save the city but there will be a few self-inflicted bruises along the way as he reconciles his newfound celebrity status with his responsibility to the world-at-large.

A few subplots don’t come together as deeply as they could (such as Billy’s search for his mother) and the finale drags out longer than it needs to (some of the fighting stuff with the kids and the monsters is alarmingly unconvincing) but I still had fun with Shazam! and there’s a strong chance that others will too.