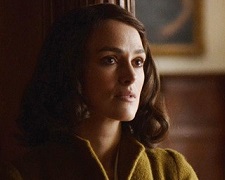 History books show that World War II came to an end between April and May 1945.  The Nazi concentration camps were liberated, Adolf Hitler committed suicide, German soldiers surrendered, and celebrations began across Europe.  A seemingly endless list of films have chronicled the events of World War II from numerous locations and perspectives.

The Aftermath takes us to a post-war time period that has been covered in great films (e.g. The Third Man, The Marriage of Maria Braun, Land of Mine) but to a lesser extent.  Set in Hamburg in late 1945, we see that the “official” war has ended but the ramifications are still being felt.  The city was obliterated during the final Allied attacks and the German families that survived now spend their time sifting through rubble, looking for missing loved ones, and scrounging for food.

Lewis Morgan (Clarke) is a loyal British soldier who has been posted to Hamburg to help keep the peace and arrest any remaining Nazi loyalists.  He’s accompanied by his reluctant wife, Rachael (Knightley), who would much rather be back in London.  They play the part of a nice, happy couple in public but when we see them at home, it’s clear their relationship is not healthy.  It’s as if they’re complete strangers given the way they supress their emotions and refuse to open up about their troubles.

The impasse between the pair needs to be broken and the catalyst is a widowed German soldier, Stefan Lubert (Skarsgård).  Lewis and Rachael have forcibly taken up residence in an expansive rural mansion which is home to Lubert and his teenage daughter.  Rachael is sceptical about Lubert and his loyalty to the Allies… but that is quickly dispelled when she falls madly in love with him!

The Aftermath sounds like an intriguing love triangle but the execution is suboptimal.  The story is told in such a slow, sleepy manner and it’s hard to buy into any of the relationships.  Rachael and Lubert share hot, passionate sex but there’s no sense of a strong emotional connection (the stilted dialogue didn’t help).  That said, it’s hard to argue she should stay with her husband given the dreadfully dull conversations they share around the dining table.

The end result is a film where you’re never invested in the characters and the decisions they make.  I didn’t care who Rachael picked in the end.  A few sub-plots have been added to create drama – one involving an over-zealous British soldier (Compston) and another involving Lubert’s daughter who befriends a Nazi sympathiser.  These too are clumsily handled and fail to elevate the material.

Based on the 2013 novel written by Rhidian Brook and brought to the screen by director James Kent (Testament of Youth), The Aftermath is forgettable.