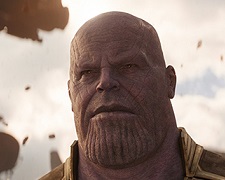 Prior to last year’s release of Avengers: Infinity War, there was speculation about whether Marvel could have the courage to do something that’s rarely done within this genre – to kill off a beloved superhero.  Writers Christopher Markus and Stephen McFeely surprised audiences by going even further.  The film culminated with the demise of not just one hero… but half of the entire cast!

Given that we’ve grown accustomed to heroes defeating villains, the finale’s unexpectedly downbeat tone provided one of the biggest cliffhangers in cinema history.  Thankfully, the twelve month wait is over and we can finally discover what happens next.  Avengers: Endgame clocks in at a whopping 181 minutes (don’t drink too much water beforehand) and considering the last film made $2.05 billion USD at the world-wide box-office, this follow-up has its sights on Avatar’s record haul of $2.78 billion USD (set back in 2009).

Infinity War and Endgame have had one of the biggest (and most expensive) casts in movie history but the reason for their success and popularity comes down to a single character – Thanos (played by Josh Brolin).  Villains within the action genre tend to be poorly developed, one-dimensional individuals who are driven by power and nothing else.  They also have a knack for crafting illogical plans and working with incompetent henchmen.

That’s not the case here.  Thanos is a fascinating character who is killing billions of people but one could argue that his actions are justified.  He believes that the universe has become unsustainable due to overpopulation and given the limited amount of resources (e.g. food, water), we’d only destroy ourselves anyway if we continue on our current path.  I’m not saying I agree with Thanos’ plan but there’s a rationale behind his actions.  It’s why he located the six Infinity Stones in the last movie and then used them to obliterate one-half of the universe’s population.

Avengers: Endgame picks things up in the moments following Thanos’ universe changing act.  Where it goes from there… I will not say.  A major part of its lure is the fact that we’ve been waiting so long to find out what happens.  There have been next-to-no preview screenings and the trailers and TV advertisements give little away.

This is an “event” movie.  I’m reminded a little of when I saw Harry Potter and the Cursed Child on Broadway in New York.  It’s not perfectly written or structured (if I’m being truly critical) but it provides a spectacle and an experience that’s hard to forget.  I’ve reviewed close to 5,000 movies in theatres and I don’t think I’ve seen another movie that generated such an audible reaction from the audience.  The hooting, hollering and applauding was constant (and added to my enjoyment).

The movie provides an appropriate climax for this point in the Marvel Cinematic Universe.  There’s some great dialogue and character interaction (particularly in the opening hour) which can often be lacking within the genre.  The film also finds a way to balance up the many storylines and subplots.  The more you can remember from the previous 21 movies, the more you’re likely to take away.

With plenty of surprises and the right mix between comedy and drama, Avengers: Endgame lives up to its hype.