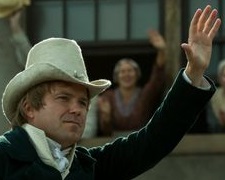 Whatever your political persuasion, most would agree that rising wealth inequality isn’t good for society.  At some point, the scales require a rebalance.  I’m not talking about this weekend’s Federal election here in Australia but rather, I’m referring to a period in time exactly 200 years ago in the United Kingdom.  Acclaimed writer-director Mike Leigh (Secrets and Lies) is disappointed that this interesting piece of British history isn’t taught in schools and so he’s taken it upon himself to create aware through his latest film, Peterloo.

It may be hard to believe but in Great Britain in the year 1819, just 2% of the total population (largely people of wealth) were eligible to vote for members of parliament in the House of Commons.  Further, electoral boundaries were a mess with some larger counties receiving less representation than significantly smaller ones.

It’s a system that had been in place for decades but the catalyst for change was an economic depression.  Following the end of Britain’s war with France between 1803 and 1815 (part of the Napoleonic Wars), the British economy struggled.  Soldiers returning from war were unable to find work, the labouring class was battling to support their families, and wages were going backwards.  On top of this, overzealous judges were trying to supress dissent by handing down harsh penalties to those who broke the law.  In one scene, a poor man is sentenced to death for stealing a coat so as to keep warm.

You don’t need to be a knowledgeable historian to guess where this story heads next.  As the saying goes – “beware the person who has nothing to lose”.  The public were growing increasingly unhappy with the government and the fact that it was made up of wealthy, out-of-touch parliamentarians who were doing nothing to address the dire economic conditions facing working class people.  Faced with few options, a huge protest march was scheduled for St Peter’s Field in Manchester, England on 16 August 1819.  Over 60,000 people would attend.

Mike Leigh has tried to depict the era and cover key events from a range of perspectives.  There’s a young soldier battling post-traumatic stress disorder as he tries to find work following the Battle of Waterloo.  There’s a series of arrogant judges looking to squash a possible public uprising by using spies to do their dirty work.  There’s a radical public speaker looking to change views while also fuelled by self-interest.  There’s a group of journalists doing their best of sort the facts from the spin.

Peterloo deserves credit for trying to tackle complex issues but it struggles to create something that is interesting and engaging.  The characters aren’t particularly remarkable nor are the lengthy conversations they share (there’s a lot of talking).  There’s a meaningful, emotional climax but it’s a long wait to get to that point.  Audiences could probably learn more about this important part of history online (there’s some good articles) than from sitting in a movie theatre for an unnecessarily long 154 minutes.

Despite its limitations and often dreary nature, the film’s messages still have value.  When it comes to society and the role of government, the question must be asked – how much has actually changed for the better over the past 200 years?