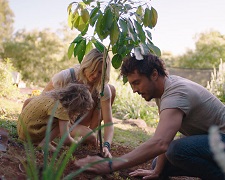 After graduating from the National Institute of Dramatic Art in 1999, Australian Damon Gameau has forged a steady career as an actor with roles in films such as Thunderstruck and Balibo and in TV series such as Love My Way, Raw and Underbelly.  In 2014, he took a slightly different tact by writing and directing his first feature length documentary.  That Sugar Film was an eye-opening movie that showed the effects of a high-sugar diet on your weight, waist line and heart rate.  It made more than $1.7 million at the box-office and became the 4th highest grossing Australian documentary ever.

For his sophomore effort, Gameau is tapping into a different subject matter that he hopes will be equally engaging to audiences – climate change and sustainability.  So much has already been said and written about these topics over the past few decades that it’s worth asking the question – what could this film possibly add to the ongoing worldwide debate?

Rather than follow in the footsteps of Davis Guggenheim’s alarm-ringing doco An Inconvenient Truth (the one with Al Gore), Gameau has crafted something that is more personal and positive.  Ever seen one of those movies set in the not-to-distant future where the writers trying to predict what the world might look like?  Gameau is trying to do the same but the important hook is that this isn’t pure science fiction.  He wants to use technology that’s readily available today to envisage where society could be in 21 years’ time if it makes the right decisions.  He describes it as “fact based dreaming”.

He explores topics such as energy, food and transportation.  Even if you’re a climate change denier, many of the ideas Gameau puts forward can be extremely beneficial in terms of pure economic value.  If you’re someone who owns a car, think about how many hours in a day the car is not used.  It’s arguably a very lazy asset.  What if we lived in a world where driverless cars could be shared around?  We’d have fewer cars, people would save money, and the large amounts of space dedicated for car parking could be put to better use.

In the same vein as a Michael Moore documentary, Gameau becomes part of the story he wants to tell.  We see him travelling across the globe and interviewing a variety of subjects (including young children aged between 6 and 11).  It’s interesting stuff.  Not as convincing are his effort to inject humour and style through the use of special effects and dream-like sequences from the year 2040.  It’s corny, doesn’t add much and detracts from the key messages.

I’d like to look back on this movie in the year 2040 with the benefit of hindsight.  If a lot of the inventions and suggestions covered by Gameau during the film become the norm, I’d like to hope we’re on the right track for keeping the planet liveable and sustainable.