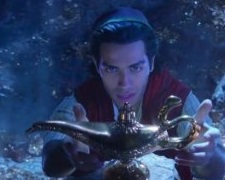 In 1992, Walt Disney Pictures produced and released a crop of films that included The Mighty Ducks, The Muppet Christmas Carol, Newsies and Honey, I Blew up the Kid.  They also had the highest grossing film of the year at the worldwide box-office.  Aladdin, an animated feature based on a Middle Eastern folk tale, won two Oscars (best song and best original score) and became a much loved, much watched movie amongst younger audiences.

Major Hollywood studios have always been an interesting beast.  On one hand, you’ve got people wanting to tell rich, fresh, compelling stories and on the other hand, you’ve got people motivated by profit.  I realise they’re not mutually exclusive (you won’t last long making great movies that lose money) but the scales are currently tipped in favour of a corporatized, profit-driven approach.

That’s evident when looking at Disney’s 2019 feature film line-up and it highlights that shift over the past two decades.  There are two animated features which are both sequels, Toy Story 4 and Frozen II, and there’s a sequel to 2014’s Maleficent.  The remaining four movies are all live-action remakes of animated features, Dumbo, The Lion King, Lady and the Tramp, and Aladdin.  I’m not saying these films will be terrible but is shows the increasing conservatism within the studio system.  They’re following the mantra “stick with what works”.

That’s also part of the reason why very little has been changed in terms of storyline for this 2019 Aladdin remake, directed by Englishman Guy Ritchie (Sherlock Holmes).  It’s 38 minutes longer than its animated predecessor but the structure is the same.  Aladdin (Massoud) is a petty thief who falls in love with The Sultan’s beautiful daughter, Princess Jasmine (Scott), but they can never marry because she is royalty and he is a lowly street rat.  He’s told that he was born worthless and he will die worthless.

That changes when finds an ancient oil lamp in the secretive, well-guarded Cave of Wonders.  He rubs the lamp, is introduced to the humorous blue Genie (Smith), and is granted three wishes which he can use to change his life.  He’s not the only person looking to get his hands on the lamp however.  The loathsome sorcerer Jafar (Kenzari) is looking to become the most powerful person in the kingdom and he knows how valuable three wishes would be.

All the songs from the 1992 version appear again here including “Friend Like Me” and “A Whole New World”.  There’s one new addition entitled “Speechless” which was written by the team of Benj Pasek and Justin Paul who are best known for their work on Dear Evan Hansen (the theatrical show), La La Land and The Greatest Showman.   The film is described as a musical but the reality is that most dialogue is spoken as opposed to sung.

Whilst I wasn’t sure about the need for the movie, it’s still a cool story to revisit.  It’s light, humorous and appealing.  There’s not a huge amount for adults but a new generation of youngsters will get the chance to have fun with these songs and characters.  Egyptian-born newcomer Mena Massoud is a great choice as Aladdin and 50-year-old Will Smith has fun as The Genie.  I can remember mock awards being given two decades ago to Wilson the Volleyball in Cast Away for best inanimate object.  There’s a scene-stealing magic carpet in Aladdin that deserves a similar level of praise.

There’s a superficiality about the characters that’s hard to shake (I’m not really sure Aladdin deserves to be the hero in this tale) but if you’ve got children and you’re looking for two hours of easy-going entertainment, Aladdin isn’t a bad choice.