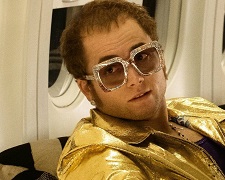 If you’ve seen one music biopic, you’ve seen them all.  That’s not entirely true but it was the first thought that crossed my mind after seeing Rocketman, a musical drama chronicling the career of singer-songwriter Elton John.  It’s covering an assortment of issues that we see again and again within this genre – troublesome parents, drug/alcohol addictions, interfering managers, money-hungry music studios and bad relationships.

My ho-hum attitude towards the movie isn’t intended to be disrespectful towards Elton John and his legion of supporters.  He’s one of the greatest musicians of all time.  He’s sold more than 300 million records and he’s delivered over 4,000 live performances spread across 80 different countries.  He’s won 5 competitive Grammy Awards, he took home an Oscar in 1995 for “Can You Feel the Love Tonight” in The Lion King, and he composed the music for one of my all-time favourite stage shows, the Tony Award winning Billy Elliot the Musical.

How do you take the life of such a complex, accomplished individual and encapsulate it in two hours?  The answer is with great difficulty.  Screenwriter Lee Hall (Billy Elliot, Pride and Prejudice) has struggled with the breadth of material.  There’s one sequence where Elton John meets a woman who he marries and then divorces.  This could have been a film in itself but this chapter, spread across 5 years, is reduced to 2-3 minutes within Rocketman.  If you’d taken a quick toilet break, you might have missed it completely!

It’s not the only part of Fletcher’s movie that feels undercooked.  The film delves into Elton John’s relationship with John Reid (Madden), a young Scottish music manager who was also depicted in last year’s Bohemian Rhapsody (where he was played by Aidan Gillen).  We see them fall in love but the physical connection sours quickly and Reid is suddenly transformed into a simple, heartless villain who no one is prepared to confront.

Based on the ridiculous financial success of the critic-proof Bohemian Rhapsody, it’s likely that any qualms and reservations will be taken with a grain of salt.  It’s hard to see this film winning any awards (although I said that about Rhapsody too) but it’s going to have enormous appeal with Elton John fans (my mum included).  They’ll enjoy this glimpse into his troubled upbringing and his creative process.  A total of 22 different songs are included ranging from favourites such as “Tiny Dancer” and “Don’t Go Breaking My Heart” through the brand new “(I’m Gonna) Love Me Again” which was written specifically for the movie.

There’s a lot to like about the lead performance of 29-year-old Taron Egerton (Kingsman: The Secret Service) who deftly illustrates Elton John’s deep-seeded insecurities.  As an added bonus, he uses his own voice during the musical numbers.  The best scenes in the movie are those shared with good friend Bernie Taupin (Bell) who serves as both a trustworthy lyricist and the voice of reason.  There’s a depth and authenticity to their conversations which is lacking with other characters (such as Elton’s parents).

Director Dexter Fletcher (Sunshine on Leith, Eddie the Eagle) wins points for some well-choreographed musical numbers that give Rocketman the feel of an expensive Broadway show.  It’s fun and it’s flashy but it’s too hard to shake the shallowness and simplicity of the screenplay.