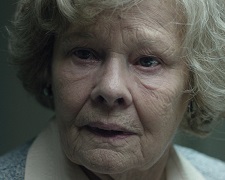 What if you discovered that your sweet elderly grandmother, born and raised in England, was a Russian spy during World War II?  It may sound like something from a fictional John le Carré novel but the story of Melita Norwood is both real and fascinating.

In the late 1930s, a twenty-something-year-old Norwood worked as secretary to the department head of a major research foundation and was able to leak valuable information about Britain’s atomic weapons to the Soviet Union.  Her illegal actions remained a secret until she was finally exposed in The Times of London newspaper in 1999.  It was at that point when an 87-year-old, white-haired Norwood stood outside her home and released a statement to the media explaining her actions.  Her friends, her neighbours and yes, her own daughter, were stunned by the revelation.

It’s worth nothing that Red Joan is only loosely based on the story of Melita Norwood.  Many details have been changed including the name of the lead character.  She’s known in the movie as Joan Stanley with the 1930s version played by Sophie Cookson (Kingsman: The Secret Service) and the 1990s version played by Oscar winner Judi Dench (Shakespeare in Love).  I’m not sure what’s behind the major revisions (the original story is already a good one) but another key change is the introduction of a lawyer son who aides his mother when interrogated by British police.

The oppression against women in the workplace over the last century has been well documented but the irony is that such discrimination helped Joan succeed with her work as a mole.  There’s a humorous scene where she’s convinced by a fellow female spy to continue on with her great work – “No one will suspect us.  We’re women.”  That was certainly the case.  The British military were paranoid about their “super bomb” research being leaked to the enemy and whilst they performed thorough audits and background checks, they foolishly turned a blind eye to the secretaries who were responsible for filing valuable documents.

Brought to the screen by Tony Award winning director Trevor Nunn (Cats, Les Misérables), Red Joan lacks pace and energy.  It’s a largely ho-hum drama that gets bogged down in detail with Joan’s college years at Cambridge and her on-again-off-again relationship with a German Jew (Hughes) who helped indoctrinate her within communist circles.  An additional romantic storyline involving her boss (Campbell Moore) adds little in terms of substance and character development.

Despite the film’s limitations, there are some layers which achieve their purpose.  She’s not exactly Ethan Hunt but it’s interesting to see the techniques used by Joan to smuggle photos and research material outside of the well-guarded office.  The most surprising, thought-provoking layer sees the older Joan explain and justify her criminal actions to her middle aged son.  She’s a woman of strong conviction who shows little sign of remorse.

It’s an intriguing true story but Red Joan isn’t the slick, gripping thriller you might expect.