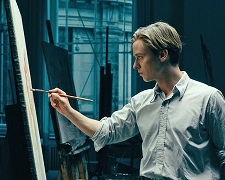 More than 200 films were released in Australian cinemas in 2007 and my favourite was The Lives of Others.  It was a riveting drama set in the 1980s that looked at the role of the Stasi, a police organisation that, through its huge army of secret informants, suppressed dissent against the East German communist government.  It’s a fascinating period of history that is seldom covered on screen (at least when compared against the abundance of German movies set during World War II).

The Lives of Others won director Florian Henckel von Donnersmarck the Academy Award for best foreign language film (beating Pan’s Labyrinth in an upset) but in the decade to follow, he’s curiously made just one film.  The Tourist, a 2010 English language thriller starring Johnny Depp and Angelina Jolie, was a modest success at the box-office but was savaged by most critics (myself included).

In what is his first movie for eight years, Donnersmarck has returned to Germany and delved into another intriguing chapter in his country’s history.  Never Look Away tells the tale of Kurt Barnert (Schilling), a young painter who grew up in a Nazi-ruled Germany and now, following the cessation of World War II, is trying to find his artistic voice.

The story is “inspired” by the life of Gerhard Richter, a renowned painter born and raised in Dresden.  That has created a point of controversy.  The real-life Richter, now 87 years of age, didn’t agree to a biopic and while he shared information with Donnersmarck, he’d done so under the impression that the movie would be heavily fictionalised.  It’s created a humorous, topsy-turvy scenario where someone is unhappy that a movie too closely resembles their life!  Such criticisms are normally the other way around.

The film has a lot to say about art and its value.  Kurt finds himself in a repressed Germany (post World War II) where social realism is pushed heavily by its leaders.  Despite his dislike for the art form, he reluctantly accepts a job painting giant pro-government propaganda murals as a source of income.  He hasn’t given up on his dreams though.  Cinematographer Caleb Deschanel (The Natural) captures some striking moments where Kurt experiments on new art forms in the privacy of his own art studio.

There’s a secondary storyline that may sound far-fetched but it too is based on actual events.  Kurt falls in love with Ellie (Beer), a fashion design student he meets at art school.  Both are unaware of the fact that Ellie’s father, Carl (Koch), was a cold-blooded Nazi doctor who euthanized Germans with disabilities, including Kurt’s aunt, during World War II.  Carl now keeps a low profile but the authorities are closing in on him and others involved.

Never Look Away picked up Oscar nominations earlier this year for best foreign language film and best cinematography (losing both awards to Roma).  If you’re attracted to the era, you’ll be impressed with the mix of visual effects, constructed sets, and actual locations that have been used to recreate Germany in the 1940s and 50s.  The also deserves praise for its performances and the subtle film score provided by German composer Max Richter.

A few may balk at the lengthy 188 minute running time but Never Look Away is an absorbing drama that looks at the interaction between art and society.

You can read my interview with writer-director Florian Henckel von Donnersmarck by clicking here.