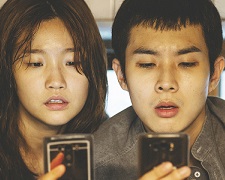 Parasite revolves around two Korean families.  They both include a husband, wife, son and daughter but that’s where the similarities end.  Family A is dirt-poor.  None of them are currently employed (unless you count folding pizza boxes as a job) and they live in a tiny basement apartment that overlooks a smelly alleyway where drunk guys often urinate.  They can’t even afford the internet and so they creatively steal Wi-Fi data from neighbouring premises to stay in touch with the rest of the world.

Family B is extremely wealthy.  They live in a beautiful, spacious mansion designed by a renowned architect.  They don’t fret about mundane tasks and daily chores because that falls upon people they can afford to employ.  A smartly-dressed chauffeur drives them around town in a luxury car and an experienced maid takes care of all cooking and cleaning needs.

The odds of anyone from these two families interacting would be ridiculously slim (if not zero) but a chance encounter changes that.  The son from the poor family (Choi Woo-shik) is approached by an old friend and asked if he could provide English language tutoring sessions to the daughter of the wealthy family.  It’s not exactly his area of expertise but, in need of cash to help his struggling family, he does enough to bluff the daughter’s parents and land the job.

At its world premiere last month, director Bong Joon-ho released a memo to critics asking them “refrain as much as possible from revealing how the story unfolds” so as to provide a “wonderful gift to the audience and the team that made this film possible.”  I’m happy to oblige out of respect to the filmmaker… and also because I’d run over my word limit if I tried to explain the complex narrative.  I spent 10 minutes trying to provide a verbal overview with a friend last weekend and even that wasn’t enough time!

As we saw with Burning earlier this year, another brilliant South Korean drama-thriller, you’re never quite sure where this story is heading.  Just when you start to get comfortable, Bong Joon-ho throws a curveball and changes the focus and the genre.  If you’re like me, you’ll need a few days (and perhaps a Google search) to reflect on the fate of the characters and the film’s numerous themes.  It’s the kind of movie you’d never see come out of Hollywood and there’s a lot to process.

In a competition that included new works from Quentin Tarantino, Pedro Almodóvar, Ken Loach and Terrence Malick, Parasite took home one of cinema’s most prized honours by winning the Palm D’or at the 2019 Cannes Film Festival.  Jury President Alejandro Gonzalez Iñárritu (Birdman) said the decision was unanimous and described the film as a “unique experience” that “spoke in a funny way about something so relevant and urgent and global.”  High praise indeed.

Hopefully you’re intrigued because there’s not much more I can say.  Parasite is weird, funny and unforgettable.